I felt the need to cover this subject as well before the year end, because in my humble opinion it will be the dominant market driven theme of 2014, and if you're an investor or an active trader you want to make sure you understand the market implications of such a big event, because it will dictate the market tone for the next year. Even if you're only a technical analyst trader there is no way you haven't heard at least one time about "Taper", so have you ever asked yourself what does it mean and how it will affect your trading operations? The sole purpose of this article will be to answer precisely to that question.

The word tapering in financial terms is increasingly being used to refer to the anticipated reduction of the Federal Reserve's quantitative easing(QE), or bond buying program. The current Federal Reserve quantitative easing (QE3) accounts for purchases amounting to $85 billion in Treasuries and Mortgage Backed Securities (MBS) per month, with the main scope lower interest rates and therefore bolster growth.

Since the global financial crisis of 2007–2008 the FED has begin using new type of market policy like Quantitative Easing to try to stimulate economic growth. QE is the same as printing money. Interest rates where already at record-low levels, so in order too pump more money in the economy the central banks around the world where left with only one option to buy assets, usually government bonds, using money it has simply created out of thin air, that's basically what QE means. While the FED was buying this new assets, the institutions selling those bonds will then have more money in their accounts, which then boosts the money supply(see Figure 1).

But that is just theory, my personal opinion is that QE has done nothing for the real economy, it has not injected cash into the system rather it has injecting cash into the banks buying risky assets they wanted to get rid of and secondly they
assumed banks will increase their lending, to support the economy, but all the banks are doing is still requiring 110% collateral for a loan, which is almost impossible for small business to get a loan in such conditions.

The question isn't whether Fed will start tapering or not, because it's obvious that it will do so, but rather WHEN they will start tapering. Timing is essential in this matter and if you can anticipate when this process will start taking place, money are laid around the corner for you to make, millions of dollars will be made and lost during this process by investors and traders alike.


So why hasn't Fed start tapering in September? I'll give you my personal take on this matter. I think this is normal strategic behavior for the Fed to test out ideas to see how the market participants will take such a change in market policy. They must implement some strategic tactics before to start tapering otherwise they risk crashing the stock market and I'm sure they don't want to be blamed for causing such a catastrophic event.

And if you think that's easy, timing when the Fed will start tapering, just think again, only recently we saw FED unexpectedly refrained from tapering at their meeting in September, taking everyone by surprise and shocking the market. Every analyst and economist was beating for a September tapering like a done deal, but the no taper decision boosted EUR/USD to levels last seen in February as the dollar retreated, at that time. If you where on the right side of the market you could have made lots of money as for example EUR/USD has jumped more than 200 pips in a matter of few hours on that news alone (see Figure 2). 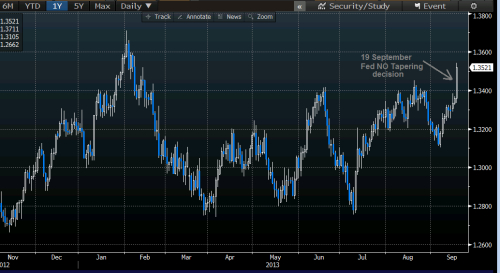 The best conclusion you can draw from here is that you have to consider both sides of the market and never rule out the possibility of tapering expectations to be postponed until 2015. Always be prepare for the unexpected to happen, and just let the market to guide you. With the taper talk fading away this has put pressure once again on the back of the dollar as Janet Yellen the new FED Chairman is known as a strong QE supporter and in her last appearance she said she sees danger in ending quantitative easing too early.


The Fed will start tapering, not because of strong economic data or because the unemployment will decline, but because of fear that the stock market will enter in a bubble territory because of excessive speculation. This is what the Fed has really done with their QE program sending the equity market to historic-high levels.

As a Forex trader you may ask yourself what is the implication for the US dollar, and what is the better option to find the answer if not looking at past market reaction (see Figure 3). There are other structural factors, other than QE tapering, that are supportive for a dollar rally in coming years, like the raise in the interest rates. Historically, Fed will always raise interest rates with every stock market rise.

As we saw the equity market soaring to historic-high levels, at the same time we saw the correlation with the the US dollar which was moving in the opposite direction and was selling off each time a new quantitative easing program was announced. Best trades are always emotional ones, it seems that in order for a change in trend to take place the market must move to the absolute extreme to scare everyone and force the weak hands to liquidate just have a look at Figure 3, each one of the QE program has been announced after some extreme movements, it seems like the Fed has been timing the market perfectly as each time they started/ended an QE program a swing high/low was put in place.

Next, lets look a little bit closer to the market action, to one particular case, after Fed ended QE2. In Jun 2011 Fed decided to put an end to his second QE program, and at that time EUR/USD plunged more than 2500 pips in a matter of few months. Although we had one big rally after Fed launched the Operation Twist program but the market wasn't convinced by the scale of this new bond buying program so as it can been seen Op Twist rally was quickly fade away. Operation Twist was as big as previous two QE programs.

As a trader, we like playing with numbers so let's assume we where actually trading that market event with a minimum entry order of only 10 full standard lots which is one million $ in nominal terms, if we where able to catch the entire 2500 pips movement that would translate into an actual profit of $250K, that's a nice paycheck if you think it has come from one idea and one trade.


During the course of this year hedge fund managers, economists, analysts and traders alike have been try to timing the odds of QE3 tapering, without much success, driving some sharp market moves. You have to pay attention to this powerful macro theme as they will put in motion strong trends (see Figure 3). So, in order for us to be able to to trade successfully we must keep in mind both sides of the market and don't rule out the possibility of tapering being postponed until 2015.

Now, if I where to answer the question : Is 2014 year of the dollar? I could say that after recent increase in the US long-term interest rates the US dollar could begin the next multi-year bull market. Beside Fed starting to taper there are other reasons that favors an US dollar bull market like the increased divergence in economic performance and therefore in different monetary policy among developed country. Bank of Japan is expected to increase their already mighty stimulus program, RBA has decided to kept the door open for another round of interest rate cut if the economy is not showing signs of recovery, and ECB is likely to remain highly accommodative over 2014. Taking this arguments in consideration the US dollar is likely to experience a broad-based rally in coming years.

Although taper odds skyrocket after last non-farm payrolls there are still reason enough for Fed to wait and the best lesson we can learn after September NO taper decision is to never rule out the possibility of tapering expectations to be postponed until 2015.