On the morning of September sixth, Swiss National Bank (SNB) announced a minimal exchange rate of 1.20 for the pair EUR/CHF. This was expected, but rather unusual event in the forex market. Just after 08:00 GMT from the SNB announced that they will devote the necessary resources to support the franc at a level of at least 1.20 against the euro. The big overvaluation of the Swiss franc now poses a threat to the Swiss economy and carries a risk of deflationary spiral development. Even at a rate of 1.20, which is 8% above the today morning rate, the swiss frank is still overvalued, according to SNB and the devaluation should continue further. The SNB announced that there is consensus for buying unlimited quantities of foreign currencies (i.e. euro) if it is necessary to support this exchange rate.

The movement of about one thousand pips in only 25 minutes is such a rare event, that it is practically impossible. It could be indicated as a very unusual black swan. This is one of the many cases showing that the statistical science fail to predict the probability of such a big economic event, because they are out of the range of the normal probabilities. This was the biggest one day movement in this pair since the Bretton Woods system disintegration in the late 70s. The volatility increase in all the markets now shows the uncertainty in the international monetary system and reflects positively on the price of gold as a safe haven. The movements of such a range could seriously affect the trust in paper money as an accounting and wealth measure.

SNB already have some experience with fixed monetary policies. During 1978, SNB pegs frank to the deutsche mark after 80% increase in its value between 1972 and 1978 year. The two year fixed rate was fairly successful, but accompanied by a high inflation rate in the country. Such consequences could be expected also now, as SNB have to print a lot of money in order to increase the money supply necessary to sustain the exchange rate above the 1.20 level. In the end of the 70s the fixed rate was removed when the Fed chairman Paul Volcker start an epic fight against the inflation in US and drastically increase the interest rates. But now such a case is almost impossible.

It will be very interesting what will be the SNB decision for investment of the increasing amount of euro, which it has to collect. The most probable possibility could be investment in safe government bonds or directly buying German and French government debts, which will additionally increase the imbalances in Europe economy as the peripheral countries will continue suffering from a lack of funding sources. Switzerland has a relatively low budget deficit and the balance of their account is fairly positive. So the European stock markets react positively to the announcement. The Euro also increases drastically immediately after the announcement, but goes again down later, while concerns about some European banks and upcoming debt crisis prevailed. In the next few weeks we will see if the SNB decision will help in preventing the market volatility or in the other case it will trigger further volatility with unpredictable consequences. 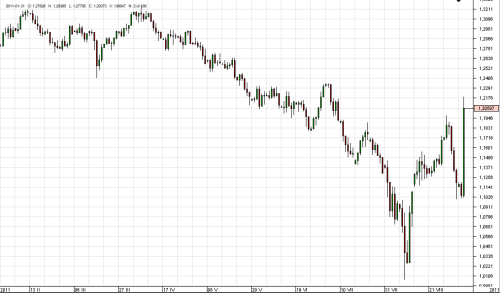 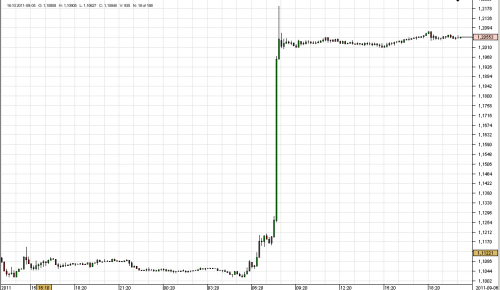