Major currency pairs rallied sharply last week to reflect improved risk-appetite within the context of renewed commitment from the US Federal Reserve and expectations of more aggressive monetary policy stance from the Bank of Japan. These gains contrasted the sharp declines of the previous week that took place amidst growing pessimism surrounding the Euro zone economy and the looming US `Fiscal Cliff` heading into 2013. The EURO USD gained just under 300 pips since the lows of that decline, together with the EURO JPY (400 pips), GBP JPY (240 pips), NZD USD (120 pips) and the EURO CAD (280 pips). Similarly, the USD CHF and the GBP CHF - which move inversely with those pairs- declined by 150 pips and 185 pips, respectively.

On Wednesday, the FOMC announced that it had decided to maintain the Federal Funds Rate at the 0.25% level while also announcing that they would be replacing the expiring `Operation Twist` programme with new Treasury purchases to keep long-term interest rates low. However, the more surprising aspect of the release was the linking of the monetary policy programme to a specific target for the unemployment rate. As long as inflation and inflation expectations remained within satisfactory parameters, the policy stance of near-zero interest rates was going to be kept until the unemployment rate declined to 6.5% from the current 7.7%.

The natural implication of this for the currency market was that USD weakness was going to be expected until at least 2015, which is when the Fed believes that this target rate would be achieved. Given the strong dependency of the global economy on a US recovery, this explicit commitment provided a welcomed lift to risk-appetite across the Forex and the wider financial markets.

Farther away in Japan, where the recession has taken a strangle hold on that economy, the Bank of Japan (BOJ) was expected to announce more aggressive stimulus measures this week following the general elections on Sunday. It was believed that the opposition Liberal Democratic Party would be victorious and that BOJ policy action would reflect the views of opposition leader Shinzo Abe who has been pushing the central bank for more powerful monetary stimulus. Yen weakness would be the natural outcome and this was reflected in the losses for the currency over the past five trading days relative to the Euro, Great British Pound and the Canadian Dollar.

Most traders who where keeping close tabs on these developments could have blindly started trading against the Yen and the US dollar and made several hundred pips within a few days. However, there were also very strong technical setups that would have helped in this decision even if you were uncertain about the implications of these factors, given the constant stream of related but contrasting economic and financial news.

The Daily Chart had already formed a Pennant Consolidation pattern since September this year and after the recent decline in the Euro to the Support area of 1.2900, it then u-turned sharply to start a new short-term uptrend towards Resistance. This started between Sunday and Tuesday ahead of the FOMC statement on Wednesday, continuing thereafter until Friday when the 1.3100 Resistance boundary was hit and finally breached. 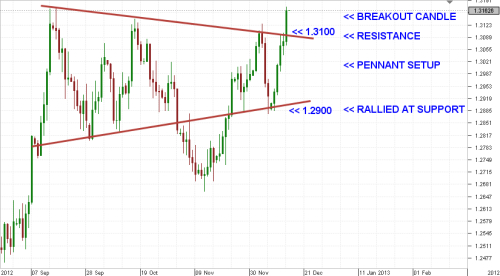 The start of this uptrend was visible on the 30 Minute Chart and a few hours ahead of the FOMC statement and press conference on Wednesday, a breakout from a consolidation pattern provided an entry opportunity to go long towards the 1.3100 area. Entry was at 1.3026 with the Stop Loss at 1.2992, exiting at 1.3086 just short of the Daily Pennant Resistance (Trader Contest). 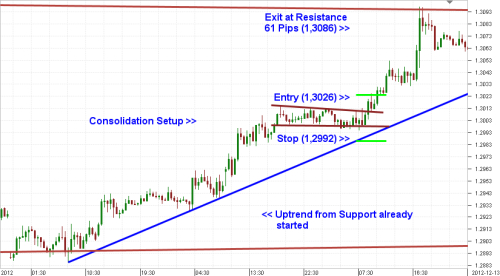 As optimism and risk-appetite returned to the markets on the back of the FOMC´s statement and expected BOJ stimulus, Euro strength was also seen against the Japanese Yen as it surged by 400 pips in only 4 days. An uptrend had already been in place following the breakout from the Pennant and the break of the recent Counter Trend Line was another signal that further gains for the Euro would take place. 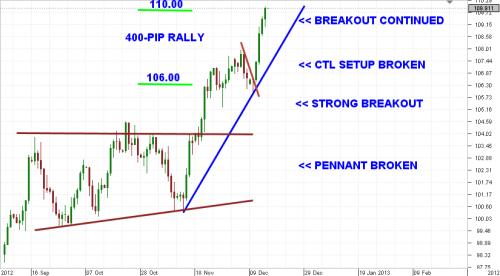 The break of this Counter Trend Line started on Tuesday and was reflected as a break of the downtrend lines on the 30 Minute Chart. A consolidation pattern had formed above the Outer Downtrend Line and a trade was executed to go long for a 100-Pip profit when consolidation was broken (Trader Contest). 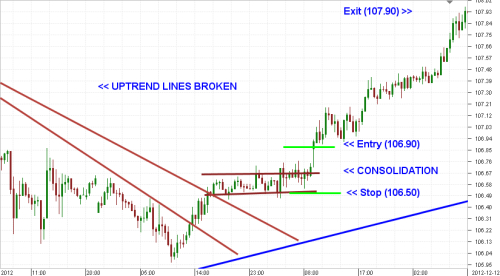 With the above-mentioned breakouts taking place, the GBP CHF was traded a few hours after the EURO USD entry based on its own technical setup as well as the inverse correlation it has with most Euro pairs. The Daily Chart shows that there was an opportunity to trade it short as the 2nd Resistance point of a Pennant was being formed just above the major Downtrend Line. 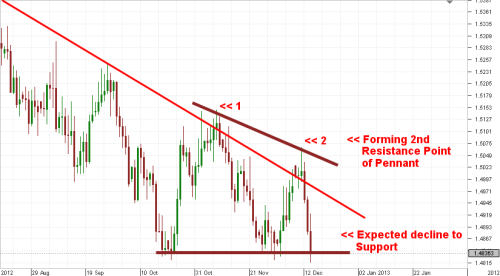 The 4 Hour Chart had formed a smaller Pennant above an Uptrend Line and a break of both was expected to signal the start of the downtrend to create that 2nd Resistance point and start the move to Support. 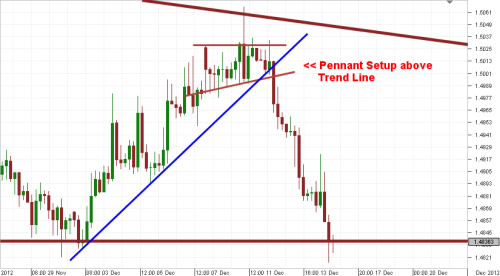 When the 30 Minute Chart gave a bearish candle that broke both the Support of this 4H Pennant and the Uptrend Line, it was time to get in on the move with an entry at 1.4888 and a 42-Pip Stop Loss above the Resistance at 1.5034. After only 27 hours, the 100-Pip target chosen for these types of breakouts was hit at 1.4888, close to the end of the US trading session (Live Account). 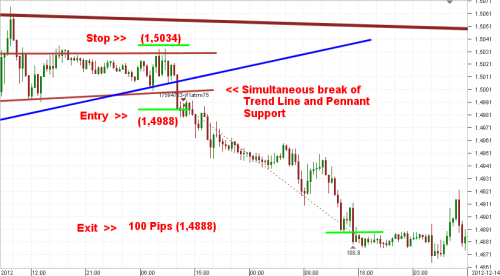 Short-term breakouts like these can be traded each week with the support of underlying economic developments. Expectations of important decisions by the major policy makers and their effect on currencies greatly assist in choosing the right side of the market to be on for accurate and consistent profits. Going forward, it would appear that Euro strength will continue at least against the US dollar given the strong breakout above the 1.3100 area of the Pennant. However, the resolution of the US fiscal problems between now and the January 1 deadline will be a major factor in the direction of this pair as well as on-going issues in the Euro zone regarding area-wide banking supervision, bank support and bailout assistance for other countries.