Shorting the yen and Japanese Government Bonds (JGBs), over the past 2 decades, has been such a disastrous trade for so many long term investors/traders that it is called by industry veterans as the "widow-maker" trade, and it is still making victims today. This article will explain why so many smart people were "killed" by this trade, why it didn't work then, and why it may finally make sense to short the yen in the not so distant future.

► Historical background: the good times and then the bubble...

In the mid-1950's, agriculture still accounted for about 40% of the workforce, and the economy was characterized by low wages and uncompetitive industries, but the next three decades would bring such an unprecedented economic growth that by 1980 nominal GDP was estimated at US$1.065 trillion, compared to only US$44 billion a mere 20 years before.

After WWII Japanese citizens were encouraged to save more of their income. With so much money in the banks, the country running bigger and bigger trade surpluses, and falling interest rates, credit was easily available. This led to a bubble of biblical proportions in the real estate and stock markets in the late-80s. 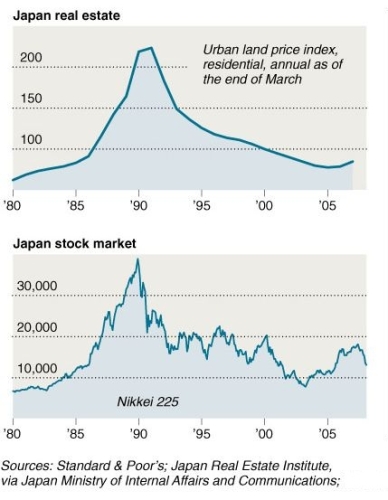 The bubble finally collapsed causing a catastrophic debt crisis, Japan's economic miracle was over and the country would now enter a period of chronic low growth (with many recessions along the way) know as the Lost Decade/Lost Years.

At the peak of the bubble, the USD/JPY pair was being quoted at over 140 (December 1989), it quickly rose to 160 just 3 months later, and has been on a steady decline ever since. The same phenomenon can be seen in other JPY pairs, not just USD/JPY. 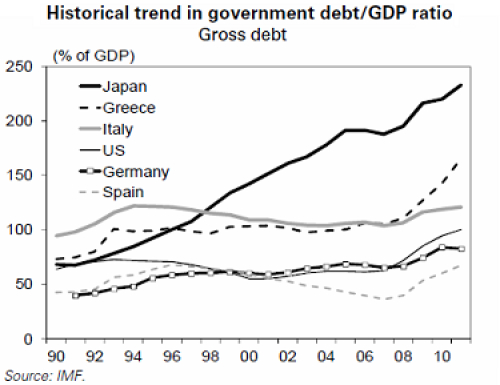 Low economic growth, spiraling government debt, the effects of an economic bubble still being felt all over the country and an aging population, but somehow the currency and the bonds are still rising significantly? This has to be the best trading opportunity ever, both the yen and bonds have to come down to more "normal" levels, in line with other countries with too much debt and low GDP growth, or at least in line with the rest of the developed world, right?

Unlike other debt-ridden nations, Japan is a huge net exporter, its trade surpluses over the years have allowed the country to accumulate significant savings, which exceed its investment needs. This, in addition to high household savings rate, is very positive for any currency. The repatriation of profits by Japanese exporters (exchanging dollars/euros/etc for yen) acts as a constant and powerful boost to the yen, and the huge domestic savings means that JGBs are bought almost exclusively by domestic investors.

Japan doesn't need to offer higher bond yields to attract foreign investors like most countries are forced to do, nor is it vulnerable to rating agencies downgrades or negative market sentiment towards JGBs. Demand for Japanese bonds is assured by domestic banks, pension funds, insurance companies and retail investors, no matter how low the yields are.

When the economic bubble burst, the Bank of Japan (BoJ) quickly initiated a series of interest rate cuts to fight the recession, but this had little effect in reversing a sharp deleveraging of the economy, with falling asset prices, lower consumption and subsequent deflation. Unlike inflation, deflation causes money to gain purchasing power over time, so this is another push to the yen relative to other currencies.

The yen is also considered a safe-haven currency, so its value increases in times of higher risk aversion, a common situation since the dot-com bubble burst in 2000.

That was then, but now Japan is facing numerous structural challenges, including (but not limited to):

- Government debt to GDP ratio has reached an unsustainable level of close to 240%. The budget deficit was 9.7% of GDP in 2011, and forecasts estimate it to be only slightly lower in 2012. So this means that total debt will only increase even more, because more bonds needs to be issued to finance these deficits.

- Japan's household savings rate stands at just 2% today, and it is expected to actually become negative in the near future. The direct effect of this is that there is less capital available to invest in JGBs, at a time when more and more debt is being issued. 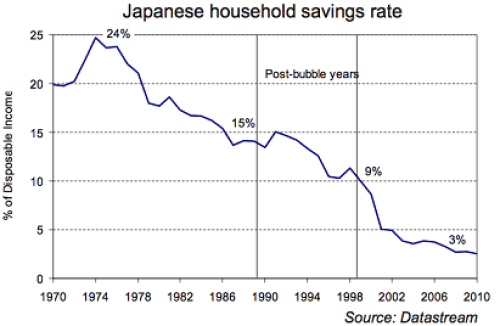 - An aging population which causes the savings rate to lower even more, because older people tend to spend their savings instead of increasing them, due to higher healthcare costs and lower incomes. As the population ages, the government will have to spend more money on pensions and healthcare, while collecting less taxes from the shrinking workforce. And there's the fact that the population is not only aging but actually decreasing, so assuming that productivity per capita remains the same, then total GDP and tax revenue will be lower in the future and debt to GDP ratio will rise even more. Demand for JGBs will suffer considerably.

As proof that this is already happening, the biggest pension fund in the world, GPIF (Government Pension Investment Fund, Japan), announced in July that it had been forced to sell JGBs because the number of people receiving retirement payments has been increasing. 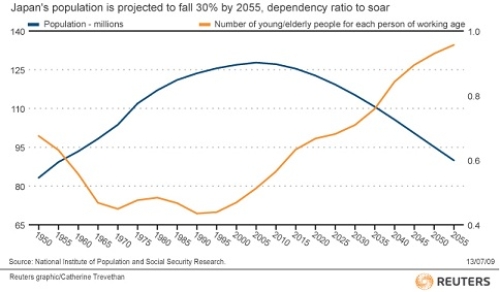 - Trade deficits and loss of competitiveness. Japan has maintained a trade surplus for many many years, until now. In 2011 Japan record a trade deficit for the first time since 1980, and posted a larger that forecast trade deficit of 517.4 billion yen in July 2012. The biggest contributor to this loss of competitiveness is the strong yen, which hurts exporters and cheapens imports, other factors include the slowing down of the world economy, and higher energy imports due to the shutdown of several nuclear reactors. 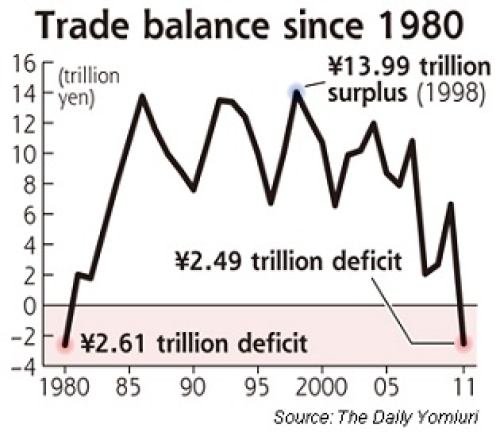 Basically, all the factors that caused the yen and JGBs to rise for two decades are inverting right now, in addition to the problems the Japanese economy already had. As more debt is issued and less domestic capital is available the Bank of Japan will be forced to seek foreign investment (or Japanese capital invested abroad), which will naturally demand higher yields. Higher yields will cause even more strains in the economy, and the currency will follow the bonds all the way down.

"Japan can always print money if they are in trouble, they won't default on their debt" some of you are thinking. They can, but a massive money printing program will simply cause a surge in inflation and devalue the currency, which is what I'm looking for, anyway. There's no easy way out for Japan or the yen.

In my opinion, the long term prospects for the yen are very bearish, but this doesn't mean that you should start selling JPY right away. We are in a risk-off mode, so I don't expect any significant yen selling in the short term. These structural challenges will have an ever increasing weight on the Japanese economy, but this is a gradual and slow process, I don't see a crash in the yen anytime soon.

Also note that Japan is still a big net exporter of capital, if companies repatriate that capital invested in other countries in order to face domestic problems, that would surely cause the yen to rise temporarily. I expect the yen to remain range bound for the next 18-24 months, rising and failing whether there's a risk-off/risk-on environment, but without creating any major long term trends.

By 2014, when the US Fed is expected to start raising interest rates, and the debt crisis in the eurozone may be closer to a conclusion, then I can see the yen initiating a secular bear market, slow and timid at first, but gaining momentum as years go by and the situation is Japan worsens. This won't be a perfect trend, there will be major retractions along the way, but the long term trend will remain bearish for many years or even decades.

Feel free to leave a comment or any questions you may have.

Sources for charts and related data: