Community
Article contest
Riding the Price Action Part 4 - the Sequence
In my previous articles I explained most essential aspects of price action and its relations to: sentiment, risk-to-reward with money management and liquidity dynamics. That is a necessary context, which has to be considered when trading the sequence.

Most notable price moves are in between entry and exit points of the market movers. While traveling towards the ultimate profit taking point, market movers cash out earlier and re-enter at better price. This precautionary profit taking and re-entry actions occur in the process of risk and money management, also it gives opportunity to squeeze more profits out of the same range.

Areas where these precautionary profit taking and re-entry actions happen are displaced in a certain sequence, which pre-defines the future range.

The sequence is based on Fibonacci numbers with added deviations in between. These deviations represent interchanging risk to reward conditions around Fibonacci numbers. Interestingly enough, these deviations most of the times play more important roles when it comes to reversal of the price movement. Probably in part because of the market mowers need to hide their intentions.

If one puts Fibonacci retracements on some large and nicely looking swing of the past – will find out that price already reacted to Fibonacci numbers, which makes one to wonder – maybe in the making of this swing, this sequence was already there? Even more interestingly, most notable rejections inside of this swing happened in between the Fibonacci retracements, which makes one to wonder even more – what is there in between the Fibonacci numbers that makes price to reverse.

Such logic was the turning point in my personal learning period – after noticing that most notable price action points of the past swing before its completion, coincide in a very suspicious manner with deviations of the future (complete) swing.

Also, when it comes to large monthly or weekly ranges in size of thousands of pips, something smaller than standard Fibonacci numbers must be applied on the charts in order to have more frequent opportunities to trade and at the same time – more complex and more precise sequence to fallow and to get confirmations for.

Let’s look closer in to what lies in between Fibonacci numbers, what smaller levels could be derived. For this article I’m using one particular technical situation on hourly EUR/USD chart (last price feed on 1st August 2014), with a clear target nearby. It will be interesting to compare deviations, created in advance and after the fact developments. One thing to note – target at 1.3510 is just a small part of a bigger picture, so it could get reached without much of a hesitation and even – go through in one volatile impulse without even stopping at the target. One thing is quite clear though, that direction is bullish and bullish sequence is used for this example. Fibonacci of Fibonacci. If a distance in between 0 % and two major Fibonacci numbers of 61.8 % and 38.2 % is divided in smaller Fibonacci retracements – few interesting levels appear at almost the mid points in between main numbers, see figures 1.1 and 1.2. The interesting part will reveal itself while going further with analysis of the range. 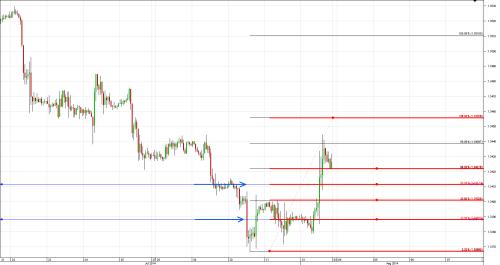 The midpoint could be found in between every possible deviation of the range, but it’s important to not overdo with none-essential calculations and stick with equally displaced and most logical levels. See figure 1.3. Figure 1.3. Midpoints in between the middle of the range and 38.2 %, 61.8 % fibonacci numbers are very important refference points, which often act as levels for continuation of the trend.

Best risk to reward spots in the range. Risk to reward ratio of 1:3, being as a standard target in financial markets gives additional levels to watch, starting with the major one at 33.33 %. This level is particularly powerful when is tested during deep corrections from much higher levels (like 61.8 % for example). Other two frequently acting as levels for reversal are targeting midpoints around the middle of the range – 44.1 % and 55.9 %. The most promising part is that these 1:3 risk to reward measurements coincide with smaller Fibonacci retracements, displayed in 1.2 and 1.3 figures. Because these levels (18.63 % and 14.6 %) are closely to the bottom of the range – they often act as areas of last defence bellow 23.6 % Fibonacci. In this EUR/USD example it is clear that at the very bottom, bullish rejections happened to target 23.6 % and 38.6% retracements of the future range (figures: 2.0, 2.1,...,2.4). Figure 2.3. Last notable bull impulse started exectly at the point, where 1:3 risk to reward would fulfill at 38.2 % Fibonacci retracement of the future range. Beyond 61.8 %. Above the middle of the range risk to rewards start to contract bellow 1:1, so the only way to trade these parts of the range is when profits are already taken (preferably above the middle) and even so if these profits are taken several times and pays for the whole range in advance. When it comes to technicals above 61.8 %, the most notable rejections (due to the profit taking activities of the market movers) happens at places, where risk to reward reaches 1:1 distance from the deepest level bellow last impulse point. In this EUR/USD example, if current retracement point at 38.2 % will start the next attack in to the highs, probably around 76.4 % mark the next correction could start (figures: 3.0, 3.1, 3.2.). This aspect of risk management leads to one very basic principle of market dynamics – price never goes in a straight line and a correction must be expected at some point. 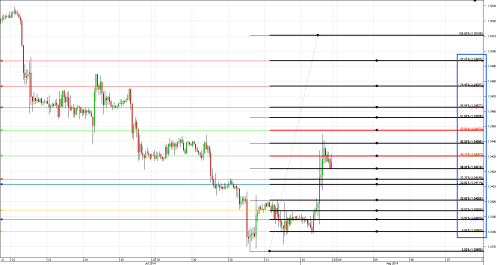 Figure 3.2. Summing up all the deviations in one sequence, which can be used as default settup to measurre potential ranges of the future.


Corrections. Every target is going to be reached whit at least one correction. But most of the times two (or more) major corrections take place and often – one of them produce lower low (in the uptrend) or higher high (in the downtrend). As explained in my older article “Riding the Price Action: Liquidity Dynamics” part 1 and part 2, widening of the range or hunt for fresh lows/highs before reversal is a natural market dynamics and should be always expected. Figure 4.1, shows one common scenario with an aggressive correction just before the last swing towards the target. 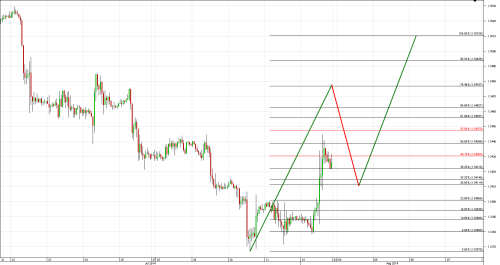 In this article I showed main principles, used to find the most logical reference points in the range. These principles can be used to divide the range in to almost an infinite amount of deviations. Of course, it’s important to use common sense and stick with a “healthy” (and tradable!) distances in between these deviations.

Along with all the insights I shared throughout the “Riding the Price Action” article series, this knowledge is the base of my trading methodology and I hope it will help to improve yours!
Translate to English Show original Toggle Dropdown