In this article we’re going to look at both the technical setup as well as the fundamental themes that have been dictating the movements in the FX Market for the month of September and what’s going to drive the market forward in the coming month. The fact that we haven’t been able to see a rally in the equity market and a continuous decline in the US Dollar it tells us that something significant is happening, and that is a shift in the belief of monetary policy and its influences over the markets. We know that the monetary policy is one of the more proactive, impressive and constantly present mover in the market, it’s a theme that has been responsible for much of the moves that we had over the past month and year as well. 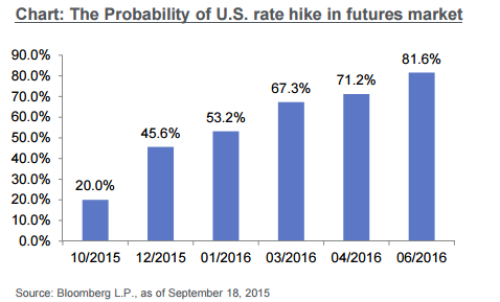 Without a doubt the major event of the month of September was the FED rate decision to hold interest rates near historically low level. However, despite no rate hike the Fed still remains one of the major Central Banks that still has a hawkish stance and the fact that they have stopped easing it’s reason enough to support the US Dollar at least in the short term. In comparison, the ECB is on the other side of the monetary policy spectrum as they are doing a massive QE program.


From a fundamental perspective the effect is to broaden the gap between the Fed and ECB monetary policy standings. In practical terms, this means lowering the yield potential for the euro and it encourage investors to use it as a short side currency and even if the US Dollar stands stagnant it’s providing more value because it’s maintaining its yield forecast. 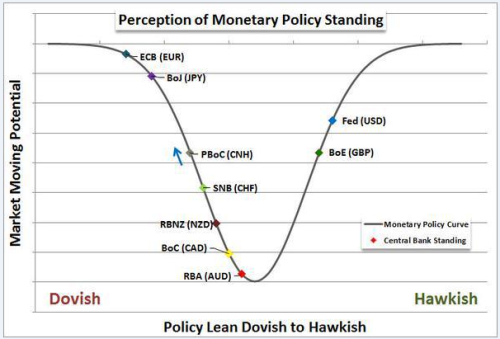 The interest rates have been one of the biggest market drivers and in the coming month will continue to be one of the biggest drivers. The ECB was giving us ongoing rhetoric related to the possibility of upgrading the QE program and that’s going to be a theme that we’re going to have to keep a very close eye in the coming month. If you want to see the EUR/USD continue to decline in anticipation of more monetary policy, we have to have something that’s really convincing otherwise the technical factors can play a much bigger role in determining the direction of EUR/USD.

The EUR/USD technical setup looks indecisive as throughout the entire month of September we have been moving back and forth in a large consolidation zone. If in the first part of the month the Euro has been following his seasonal pattern, later in the month EUR/USD has managed to erase all the gains as the uncertainty over Fed rate hikes is again a market moving theme as whenever you spell Risk, usually investors buy the safe haven currency which is the US Dollar.

The September range has been contained within an 365 pips range between 1.1450 resistance and 1.1085 support levels. We're looking to see an expansion of the range to the downside in the coming month and eventually EUR/USD will break below 1.1085 support level, but no before to see another retest of the 1.1450 resistance level, which is very close to the big psychological number 1.1500 which remains a big hurdle in the way for more gains for EUR/USD

Looking forward at the EUR/USD seasonal pattern for the month of October we can’t expect too much to happen, as usually during this time of the year EUR/USD seems to be ranging inside a very defined consolidation. However, we have to keep in mind that the seasonal cycles will only give you the tendency.

In conclusion, there is still scope for the EUR/USD to make a retest of September’s high 1.1450. With the US dollar weakening in the short-term due to the Fed delay to normalize interest rates, the path of least resistance in the month of October for EUR/USD is for further consolidation with minimal range expansion to the downside.

The BOJ is doing quite an aggressive QE program, but they can still boost their QE if inflation doesn’t pick up. But we need to answer another question if they really do want to do more QE. Their initial intention was to see their currency lower as they have thought this will give them a trade boost and thereby to help their economy. If their only success has been to drive the Japanese Yen significantly lower through their massive QE than the USD/JPY has already retraced 2/3 of the initial decline from 1990 top. It remains to be seen if BOJ will do more QE in order to promote inflation and growth.

The USD/JPY technical pattern is pretty much straight forward as since the late August sell-off, USD/JPY has been moving inside a defined range zone with 121.32 acting as resistance level and 118.60 acting as a support level. Even though trading USD/JPY in the coming month may look challenging as judging by the technical picture you can take the break of the current range in either direction, however looking at the correlation between risk sentiment and the Yen we can see quite a strong correlation. USD/JPY has a strong correlation with risk trends and when looking at the average year for the S&P 500 since 1950, we can see that the stock market is entering a period that tends to top which makes the case for further pressure on the equity market which should also be negative for USD/JPY

The dollar has been virtually unchanged against the yen as during the entire month of September it has been trading back and forth around the big psychological figure 120.00. During this entire period USD/JPY has formed a symmetrical triangle pattern, which is often seen as a continuation pattern. Broadly speaking, there are three main characteristics about such patterns: first, as I’ve written before they work as a continuation pattern around 75% of the time and only 15% of the time as a reversal pattern; secondly, once we break the triangle pattern, usually it travels the same length as the distance between the high and low within the triangle; and last but not least we have to take in consideration that there are many false breakouts.

Time-wise USD/JPY is near the completion of this pattern and most likely any break to the downside will be in response of the risk aversion environment in the market. In terms of price objective, if we project the triangle distance to the downside, we get as a possible projected target the 114.60 level.

If we’re going to break the symmetrical triangle to the downside, it will be a significant reversal in technical conviction and it has great potential, however, it hasn’t made that break and if we try to jump in the trade now it will be too early. What is really interesting with the current USD/JPY price action is that it’s resembling the same pattern we saw in 1997-1998.

Not only that the price action looks similar but also time wise, this fractal looks similar. That’s really interesting because the USD/JPY 1997-1998 fractal model has made that final sell-off at the end of September beginning of October 1998. It is no coincidence that USD/JPY has maintained a remarkable similarity to the 1998 USD/JPY price action. Taking in consideration the volatility of this market there are numbers of reasons and clear triggers to suggest an aggressive sell-off in the coming month.