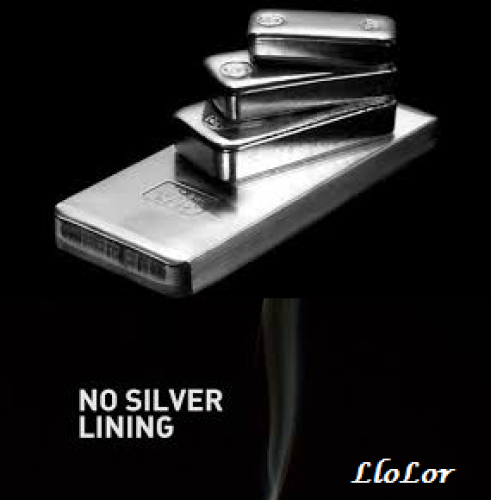 The price action in silver since the 17th of April 20117 has been downright ugly to say the very least. Having reached its 2017 high on that day after trading at $18.725 per ounce, silver has declined in twelve sessions of the last thirteen, reaching a low of 16.72 on May 2nd. Having lost about 10.7% of its value from the peak, there seems to be no end to the plunge in silver prices.

Fig 1 shows the daily chart of silver and gold, and the recent plunge in silver prices is quite evident. What is also glaring from the chart is how silver has under-performed gold in the period. Gold reached its high for the year on the same day as silver and has dropped from $1297.50 to lows of $1252 on the second day of May, a decline of 3.5%, which is nothing compared to the losses suffered by silver.

Is there something fundamentally wrong with Silver? Has the market overreacted? Will the markets have the courage to catch the “falling knife”? This article seeks to analyse the short to medium term outlook for Silver and possibly answer some questions in traders’ minds.


The Silver to gold Ratio

As can be seen in Fig 1, there is a strong positive correlation between the prices of Silver and Gold. This is not a surprise as the commodities are affected by very similar fundamentals and more often exhibit the same supply and demand dynamics. Due to the high correlation, it is possible to use the price ratio of silver/gold to determine the pricing levels of both metals in the market. Using the closing prices obtained from the Jforex trading platform, the graphs of the silver to gold price ratios have been constructed. 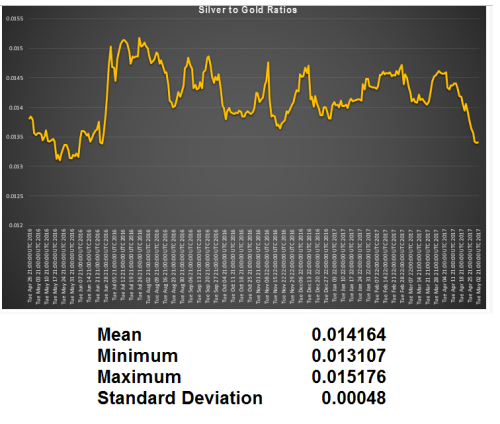 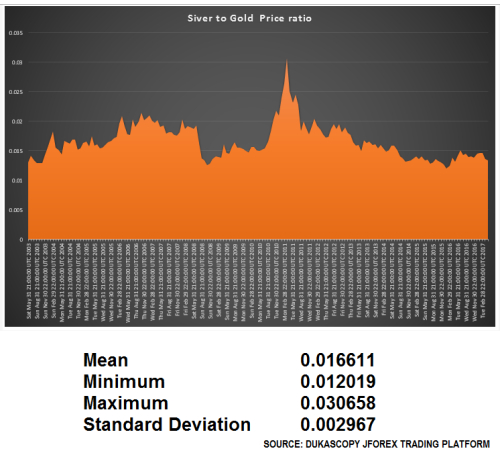 By comparison of Fig 2 and Fig 3, it is apparent that the mean ratio over the past year 0.014164 has been lower than the average ratio in the period May 2012-May 2017 (0.015152). This could be an indicator that the silver price has been under-performing the gold price. The argument behind the price ratios is that in the medium to long term the ratio will revert to the mean.

The silver price has declined to the lowest level since January 27 on the second trading day of May as shown in Fig 5 below.

Fig 5: Fibonacci Retracement levels on the daily chart of Silver

The January 27 lows were at $16.80, the same level that silver touched on May 1 before heading a little lower on the second of May. There is a potential for a double bottom at this level should the price head higher in the coming sessions. Using the Fibonacci retracement levels from the high of 17 April 2017 and the low of 19 December 2016 the current levels correspond to the 38.2% retracement level. This will be a critical support level and if breached could open the 23.6% retracement level at 16.3, before heading to the 16.00 psychological level and ultimately attempt to take down the December 2016 lows of 15.6. The bottom line is, if it manages to break below the $16.80 support level, the situation for silver could become very dicey.

Silver has been showing strong signs of weakness in the recent weeks. The economic data than has been released has also not helped silver. The recent economic data from the US has been showing signs of slowing economic growth and rising inflation. Without a concerted effort by the US government to push through tax reform and infrastructure spending while the U.S. economy contracts then silver is very likely to fall further. Silver is a base metal used industrially, will see demand sap with a slower economy.

Disclaimer: This article is an expression of the author’s opinion and views as at the 3rd of May 2017. This research is based on current public information that I consider reliable, but do not represent it is accurate or complete, and it should not be relied on as such in making trading or other financial decisions. The information, opinions, estimates and forecasts contained herein are as of the date hereof and are subject to change without prior notification.