Why Am I Here

One of the most common advices you can find in “how-to-trade“ books/lectures/articles for begginers is “do not copy others‘ actions“ and “only follow your own strategy“. I would like to challenge this point of view. In addition, I will try to show you how herding may help you to avoid losses and even gain profits.

Lets get over some things from the beginning. Even though primarily dedicated to FX spot traders, information in this paper may be used by any traders, who trade any financial instrument. At no point of this paper I will intend to suggest that mimicking others blindly is rational and profitable in the long run. Nor I will try to challenge the idea that one must follow his own strategy. What I will try to do is to show that with sufficient knowledge and understanding, following others may be profitable.

You may ask how does this work: follow your own strategy, but also follow other traders. It is not that hard to tackle. You have to have your own money and risk management rules (two most important nuances in trading). You have to have rules for entry and exit. You have to know how to manage your trades at any point in time. All of these are musts. However, there is no point for you to ignore what others are doing and not to use this information as an edge.

Let me be clear: following others does not mean following retail traders. Given the scale of FX market, they are just noise. Nothing more. What you have to take into account is movements of large and institutional traders. I hope it is clear to everyone that they are the people who drive and move the market. Thus, knowing what they are up to and not going against them may at least help one to avoid losses. And this basically is why I find statements which tell you not to herd misleading. It depends on whom you herd on.

Now lets move to the “so how do I make profits“ part.

Obviously, one cannot call some hedge fund, Goldman or UBS and ask them for their live calls. But large money does not move unnoticed, there are ways to track it. I will not suggest that it is easy, as it is not. However, it is possible.

The most straightforward way to do this is to monitor commitment of traders (COT) reports released weekly by Commodity Futures Trading Commission (CFTC). Yes, one may argue that CFTC reports represent only a fraction of futures markets, which by themselves do not have significant effect on spot prices. But like I said, we are following only large and institutional traders here. And as institutionals want to hedge their spot positions in futures markets, large traders are usually large not because they inherited loads of money, but because they are able to make good living from trading. These are only words. Lets check statistics.

All the data used for further empirical analysis was sorted and checked for pitfalls such as autocorrelation, non-stationarity, skewness of residuals and etc.

Using ten years of weekly data, lets try to find out if changes in large traders‘ long positions on euro futures denominated in US dollars are good at predicting future spot eur/usd prices. These two variables are highly correlated (correl=0.6352). This is not the interesting part yet.

This is how it looks graphically. You can see eur/usd price and net long of large traders’ positions in futures and options combined. Data is taken from Timing Charts, one can use their data warehouse freely. It is not perfectly correlated whatsoever, but when you take raw statistical data, picture becomes much clearer. 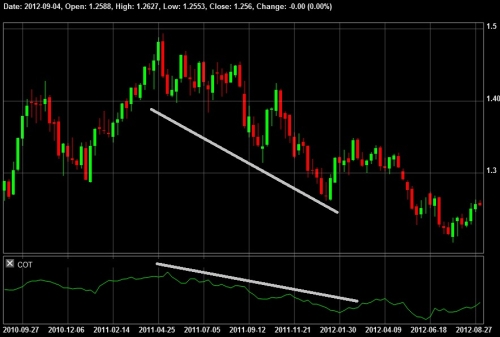 Of course, this is not highly accurate analysis, yielding undisputable results. But when logic and empirical analysis point to the same direction- I see no reason to ignore or discard it. This is additional information, which might give you an edge. And edge is all what enables any trader to make money.

This was only part 1. There are some more ways to track the sharks.

Another great tool is BBA LIBOR rates. Yes, I am aware of rigging scandals all over the place. Nevertheless, logic behind following these rates is simple: if largest banks in London start to value some currency less than others, why should I think otherwise ? LIBOR rates are trending and more often than not they change in a structural manner. It is so, as banks and other financial institutions usually do not change their view on hourly or daily basis. They act according to analysis conducted by their economists, which changes according to economic situation, not by some rumors or fads. So this one is more or less no-brainer for me.

Following COT and LIBOR should give you a pretty good grasp of how money is moving around. But that is not all to it.

Looks too Easy ? Not for any longer

Now comes the part which is hard to explain and learn. I believe most of you understand that large money does not simply stay in one currency or another. It is invested in different assets such as bonds, stocks and derivatives. Every time some fund or institution closes its position in one asset, it has to move to another. And it rarely changes positions couple times a day. It rarely changes position alone (if one fund or bank decides to accumulate something, wait for others to join). Usually money is being reallocated to a new asset within weeks or even months. To be able to profit, one has not only know what large money is selling, but also what it is buying. This part may be very tricky.

It is not rocket science. But it is an art, which requires time and effort to master. At the end of the road, it is also rewarding. These skills and knowledge helps to identify mid to long term trends and avoid entering positions against them. Not only that, when you get good at it, following trends becomes way much easier. Sadly, nothing but hard work and patience may help you from here on.

I know there are many day-traders out there, who will think this information is irrelevant to them. Do not fall for this. It does not matter if you scalp, day-trade or invest in long term positions. Not going against trend driven by large money is always the best idea. Does not matter what time frame you are in.

As stated in the introduction, one of the aims of this paper was to challenge the view that traders should never herd. It should be self evident, when you think about it more thoroughly. More of your time was dedicated to another aim. Explaining, how to herd for profit. I thought it will be more useful to explain how to get and use the information, which may help you in trading, rather than to argue why someone is incorrect. And well.. It is quite clear: proof that you may make money from educated herding disproves the statement you should never do it.