Community
Article contest
Japan - Can the Boj Achieve 2% Inflation?
Introduction:
The unmissable Bank of Japan (BoJ) meeting on Thursday the 4th of April has put in place a huge "shock and awe" level of QE, they have promised to purchase Japanese Government Bonds (JGB), ETF's and REIT's in order to increase the monetary base and help raise inflation.
A breakdown of what the BoJ is actually doing is listed below;
The overall aim of these measures is to double the monetary base, and hopefully, they believe, because of this they will start to see inflation. The current CPI Y/Y currently stands at 0.7% and has been almost stagnant for the past 18-20 years. Japan Trade balance. Thomson Reuters
There are 3 main causes for this recent drop-off which has been very bas for the Japanese economy and they are; Japanese Exports to China. Thomson Reuters.
You can clearly see the drop off in exports, nearly to 2008 levels.
However, all is not bad within Japan at the moment. Unemployment is very low when compared to other major nations, even if it is a lot higher than it was a few years ago. Furthermore there are also signs of improvement in the manufacturing sector with recent PMI's showing positive growth and a potential sign of recovery. Nikkei 225. Thomson Reuters.
As you can see the Nikkei is almost at levels not seen since 2008 and from the BoJ's perspective this shows the current monetary policy is working. The direct buying of ETF's support this rally along with the depression in interest rates mean that this move is likely to continue for as long as the BoJ is involved in open market transactions. 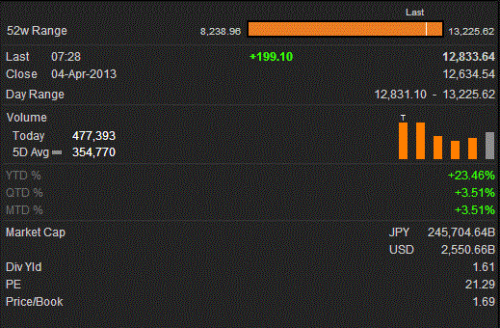 This table of data shows some interesting statistics, the Nikkei is up almost 25% this year and up 3.5% this month alone. However interestingly the Dividend yield across the Nikkei securities is 1.61%
This alone is higher than the 40 year yield and so there is high demand for Japanese stocks within Japan and so the rally is likely to continue as pension funds move into it more and more.
The next major impact was seen in the JGB market, where all time volatility was seen on the Friday following the BoJ statement.
Here is the impact on the 40 year yield;

JGB 40 year Yield. Thomson Reuters.
Currently one receives 1.26% per year for holding JGB for 40 years, this is lower than the what the US pays for 10 years! The drop off in the last few weeks has represented the largest short term move in history. This move was sparked by the BoJ saying they will buy maturities up to and including the 40 year and so the huge moves are unsurprising.
Another goal of the BoJ is to flatten the yield curve. They will achieve this by weighting their purchases to the long end of the curve and potentially sell the short end, thus making the yield less responsive to the time-value of money.

Japanese yield curve (orange) vs yield curve 6 months ago. Thomson Reuters.
From 20 years onwards the yield is almost perfectly flat as opposed to much steeper 60 months ago. Not only that, the yield on all maturities is lower making it cheaper to borrow.
This can be more effectively shown in the spread between the 40 year and 5 year (5s40s).

Japan 5s40s. Thomson Reuters
The 5s40s has absolutely collapsed in the past few weeks from 200bps to around 110bps. This is a 0.9% fall in the premium for 35 years. Normally this would be sensitive to risk assets and be correlated to equities. Now it's is back to 2008 levels where the height of the financial crisis was being experienced.
Finally, a quick look at JGB 10 year futures. This shows the price of the bond (the inverse of the yield) and you can clearly see the huge move seen on the back of the BoJ.

JGB futures. Thomson Reuters
There is very little to say about this chart as the move is clearly evident and the volatility is immense. I'm almost speechless about this.
That pretty much covers the impact on the fixed income markets and there are some interesting moves in the derivative markets also.
Here is a quick look at JPY 6 month volatility

JPY 6 month Vol. Thomson Reuters.
While still of the levels seen after the Earthquake, the option-implied volatility is rising fairly rapidly meaning the JPY will be a roller-coaster currency for the next 6 months or so and should be interesting. JPY monetary base. Thomson Reuters
As you can see, it has risen immensely over the past 40 year from 25 Trillion Yen in the 80's to almost 140 Trillion yen today. Considering the BoJ is looking to double this level. The rise in monetary base is only likely to speed up at an exponential rate.
However this being said, one has to question how effective a rise in the monetary base is on CPI and this is shown below. 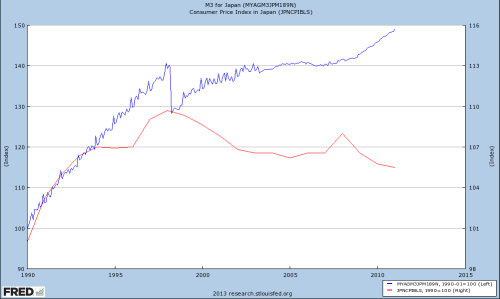 Indexed Japanese CPI (red) vs. Indexed M3 (blue). Federal reserve
While a strong correlation is expected, since the late 90's they haven't which makes you suspect why it will be different this time. Considering that the economic situation throughout the years 2000-2008 was much better than today - with lower unemployment, higher PMI's and better trade balance, it makes the case for higher inflation even harder to find.
Finally, the combination of demand-pull inflation, cost-push inflation and the wealth effect is likely to add to inflation but 2% is very ambitious and at the current rate will be difficult to achieve, therefore I believe in 9-12 months time we may see more action to "do whatever it takes" to raise inflation.
Thank you for reading
Adrian.