Community
Article contest
How to Make Money by Trading Shooting Star
One of the most popular reversal candlestick patterns is definitely a Shooting Star pattern.

Characteristics of the Shooting Star Pattern

The Shooting Star candlestick formation is bearish reversal candlestick pattern which usually results in creation of the top, at the end of an uptrend. So, what elements need to be there in order for this pattern to be created ? It needs to have a very long upward wick, however the opening and closing price have to be roughly the same. Ideally, the wick, or also called a shadow, will be at least twice the length of the body. 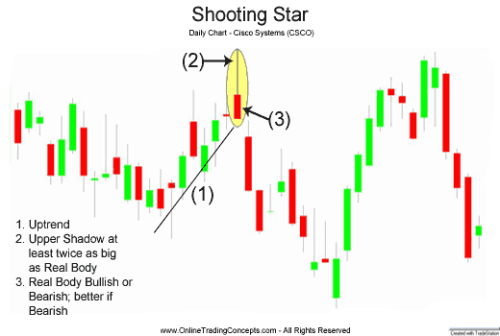 There are different types of the shooting star, but the closer it is to this basic textbook description the better. The candle can also be green but the effect is greater if we have a bearish candle. One of the key reasons why this pattern is so effective its because the
bears were able to reject the bulls completely plus the bears were able to push prices even more by closing below the opening price. There are two very important additional elements to be noted here:

1) the volume plays a big role here. The greater the volume it is at the highs, i.e. resistance level, the more effective reversal will be.

Let me try to describe how I trade this candlestick pattern by using jForex platform. I will use the EUR/USD since that's the main pair that everyone is trading. As you can see below, the pair is in the clear uptrend. We had seven consecutive higher closures and the pair rallied more than 400 pips (as you can see from the price makers on the right hand side). The price than approached big 1.33 level and got rejected. The battle of 1.33 was won by the bears. You can clearly see on this picture below that the price movement created a clear Shooting Star pattern with a wick being much bigger than the actual body and the opening and closing prices are close to each other.

Let me try to break down this now from the perspective of the trading structure. The picture 3 focuses on the H1 chart. Once we got rejected at 1.3307 the price has started to decline and close to form a Shooting Star. Now we have identified our future trade but we must decide the best place for an entry point.

My way of trading is very simple. I will wait for the price to correct to AT LEAST 61.8% and then sell the pair. If you apply this tactic to this example, you will:

This way, you risk 50 pips in order to make 75. If you want to minimize your risk further, you can sell the pair at 78.6% Fibo level. However there is a chance that you will miss out on a trade even though in this case, the price overshot the 78.6% Fibo for a bit before returning to the support level.

By trading Shooting Star pattern you have a chance of minimizing risk and more importantly, knowing where your risk is. As one great hedge fund manager once said: "A good trade is when you know where your stop loss is". In addition, you are also riding the new trend since the price has been rejected at resistance and offers you technical reason to ride the reversal, or correction at least. From my own records, three out of four Shooting Stars patterns have hit my targets in the last month. But please, stick to your trading plan and identify your SL and TP as soon as you enter into the trade. Good luck!
Translate to English Show original Toggle Dropdown