As some of you already know, my trading approach is based on medium/long term trend following, and that I usually don't have indicators on my charts (with the exception of ATR), even though some of them can be useful, if applied correctly in a complete system. Among these are obviously indicators that help us identify and follow trends. There's a relatively new trend-following indicator that you may have never heard of, because it is so rarely talked about, called Vortex Indicator (VI), which I'm going to describe in this article. This indicator is available in the Dukascopy jForex platform.

The Vortex Indicator consists of two oscillators measuring upward and downward movement, its development was inspired by the natural flow and vortexes of water that occur in rivers. You can see a vortex pattern in your charts by connecting the lows in the candles with the highs in the consecutive candles, and then the highs with the consecutive lows.

Included in the calculation of this indicator is TR (True Range) to take into account volatility, so the Vortex Indicator is a comprehensive volatility-normalized positive and negative trend movement indicator.

► Placing the Vortex Indicator on your charts

In the vast majority of cases traders should use the default values of the indicators they place on their charts, which in this case is 14 periods. 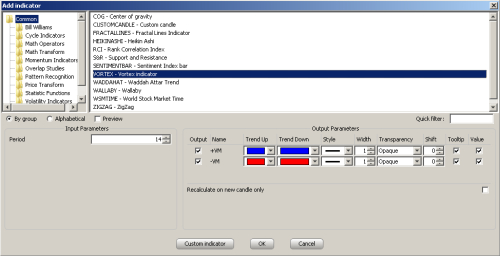 Like most indicators the VI can be used in almost all time frames and is market-neutral. However, you will have better results with longer time-frames, such as daily candles, because the "price noise" in lower time frames will produce many false signals. This is true to all indicators. If you do use the VI in a very short time-frame, such as 5 minute candles, I suggest selecting more periods for its calculation, 30 at least.

► How to trade with the Vortex Indicator

The simplest signals the indicator generates are crossovers between VM+ and VM-. So when VM+ crosses above VM- the trader should open a long position, and if VM- crosses above VM+ a short position should be opened (or close a previous long position). All trades are placed after the last candle closes and we have confirmation of the crossover. 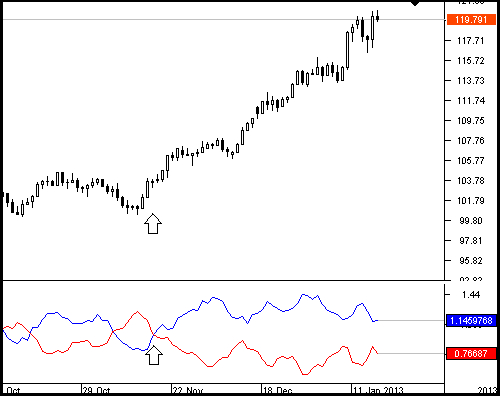 The crossover strategy works perfectly when there's a clearly defined trend, like in all yen pairs at the moment. However, when the market is in a consolidation phase, the system will generate false signals and whipsaws. As with most indicators, the Vortex Indicator works better when complemented with other studies and filters.

I suggest using two very simple filters that will dramatically reduce the number of whipsaws. The first one is adding a simple moving average (SMA) to the chart to act as a long term trend filter, and then only opening long trades if the price is above the SMA, or short ones if it is below the SMA. This way you will not open trades that go against the long term trend. A 200-period SMA is a good long-term filter, as seen in this image: 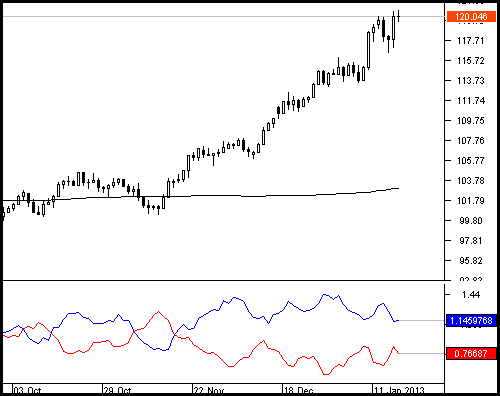 Another idea is to only place trades when either the VM+ or VM- are above 1.1. These two lines oscillate above/below 1, and when there's a crossover it means that one of the lines goes above 1 or is very close to it. To further increase the probability of opening a position only when there's a strong trend, I suggest waiting for the line to go above 1.1 (don't forget to wait for the candle to close), because the vast majority of false signals happen when the oscillator is below 1.1.

You can use other indicators or technical studies in combination with the Vortex Indicator to confirm the existance of a trend, or as part of a larger trading system. But I've tested these two filters and they drastically increase the profitablity of the VI.

There's another filter I suggest using to increase this indicator's accuracy. Check the candle where a crossover between the VM+ and VM- occurred, the extreme high or extreme low of that candle will become the entry price of the trade. So instead of, for example, opening a long position when the VM+ crosses above the VM-, you'll place a conditional order 0.1 pips above the high of the candle where the crossover happened. Only if the prices goes above that candle's high, will the order be triggered. 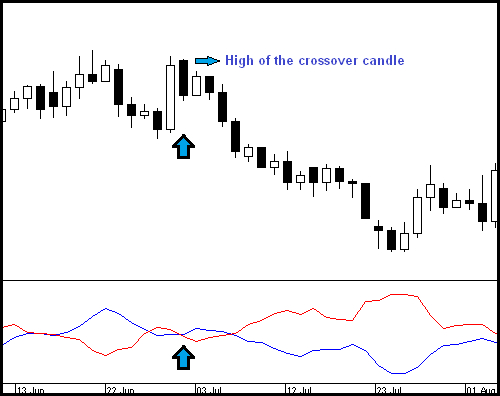 As you can see in this image, there was a bullish crossover, but the price never went above the high of the trigger candle, so the trade was not opened. Then a few bars later there was a bearish crossover which proved to be very profitable.

A good indicator or set of indicators is not enough to make a good trading system. If you plan on using the Vortex Indicator you can complement it with the money management system I described (including a calculator you can download) in my November article: How to Calculate Position Sizing and Normalize Volatility.

You'll need to add ATR (Average True Range) to your charts in order to calculate position sizing and initial stop-loss, as described in that article.

There are no Holy Grails, perfect systems or indicators. As with all technical studies the Vortex Indicator has its strengths and weaknesses. However, when used correctly it is a very valuable addition to a trader's toolbox.

Feel free to add post any comments or questions you may have.
Translate to English Show original Toggle Dropdown