Community
Article contest
How Do Gold, Inflation and Public Debt Correlate ?
Since the brexit sparked another round of gold buying, I was prompted to read and analyze correlation between the gold, inflation and public debt. As from the 2000s, the Gold prices have participated in a bull run. As a key reason, the "easy money" policies of majority of key world's central banks are to blame. So, why is the gold traditional hedge against inflation ? I have been hearing this line on the CNBC and Bloomberg for years and years, especially since we are currently in the phase of deflation.
So what are the conditions that represent inflation? That list include rising property prices, a rising stock market, and increasing asset values. But also the debt burden, representing debt with relation to income, is increasing.

High inflation usually travels hand in hand with higher debt burdens. What does this mean ? Let me try to explain this. Imagine a situation where the government borrows $10 billion today from the market and that inflation is 5%, and the government bonds yields 10%. After a year, the government owes the same $10 bn that they borrowed. Add to that 10% interest and a total is $11 bn. Since the bond yield (10%) is above the inflation rate, the investors will get back their bonds plus the interest as a profit..
In a nutshell, the higher the inflation it is easier for the Government to pay its debt. Because of inflation, the government gets more tax revenue as wages and prices increase. As the wages increase, people are spending more and more, hence the inflation helps government automatically get more tax revenue. So where does the gold fits ? 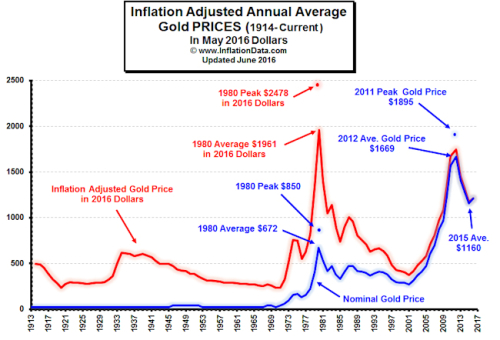 As it can be seen from the picture 1 above, inflation adjusted gold price and nominal Gold price go hand in hand more or less. Please disregard the period from 1913-1931 where the price of gold was fixed by the government. Once gold was allowed to float freely in the 1970s, the Gold prices perfectly hedged inflation. The picture 2 focuses on the US CPI and the Gold prices. And again it shows that gold prices have developed a tendency to track the CPI. 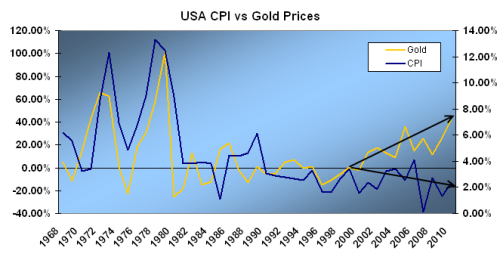 However, there is still a big question mark whether the gold correlates to inflation. The group of scholars who tend not to agree with this line, say that Investors can’t hedge against unexpected inflation by holding gold, since the returns from gold appear to have no clear relationship to inflation. This thought is backed up by recently by gold prices going higher on the brexit fears while the inflation keeps ticking lower. Still, historically, majority thinks that Gold is correlated to inflation while the higher inflation helps the government to service its debt easier.
Translate to English Show original Toggle Dropdown