Community
Article contest
History of Jackson Hole and its Importance
The markets are quite, not just because its August and many investors are on leave but also in anticipation to Jackson Hole meeting. So, why is this tiny place usually known for its winter ski complex, such an important economic event ?

Many of the world’s most powerful financial players and policymakers will gather for three days in Jackson Hole, a mountain resort in Wyoming. It goes back to 1978, when the first meeting of such kind was held and since then it offers a chance for central bankers, finance ministers and academics to talk about the world economy in a public but informal setting. The event is formally the Federal Reserve Bank of Kansas City’s “Economic Symposium”. All 12 of the Fed’s district banks organize research conferences. So how did Jackson Hole become Davos for central bankers? The first one, on “World Agricultural Trade: The Potential for Growth”, took place in Kansas City, Missouri, where the bank is based. In 1982 the conference moved to Jackson Hole (which is in the Kansas City district) and persuaded Paul Volcker, then chairman of the Fed and an avid fly-fisherman, to attend. In a textbook case of network effects, Volcker’s regular attendance attracted other policymakers and made the event an unequaled gathering for big economic hitters. Most conferences are hungry for attendance; Jackson Hole is by invitation only, and in recent years those invitations have become scarcer. Vincent Reinhart, a former Fed staffer who is now with Morgan Stanley, reckons that market participants such as Wall Street economists have gone from 27% of attendees in 1982 to just 3% in 2013. Their spots have been taken by foreign central bankers, who went from 3% of attendees to 31%, and reporters, who have grown from 6% to 12%.

To maintain the relaxed atmosphere, reporters must observe what are now known as "Jackson Hole rules": the proceedings are all on the record but all other remarks during the conference, such as mealtime conversations, are off the record. Economic history has been made in Jackson Hole; Fed officials have occasionally met secretly at the conference to organize their response to global financial turmoil. And two previous Fed chairmen, Ben Bernanke and Alan Greenspan, used Jackson Hole to signal major shifts in policy. 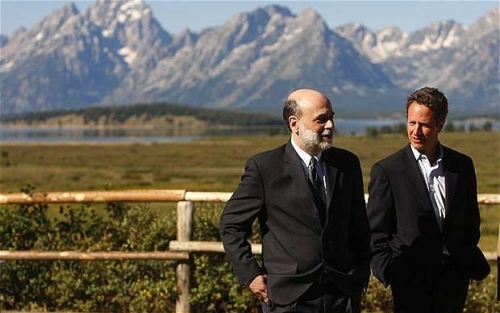 In a nutshell, the symposium focuses on an important economic issue that faces U.S. and world economies. Participants include prominent central bankers and finance ministers, as well as academic luminaries and leading financial market players from around the world. The Symposium proceedings are closely followed by market participants, as unexpected remarks emanating from the heavyweights at the Symposium have the potential to affect global stock and currency markets.

This year, additional attention will be placed on Yellen's speech and possible mention of Fed hiking again in 2016, maybe even as soon as September. In that case, watch for the strong USD bullish wave.
Translate to English Show original Toggle Dropdown