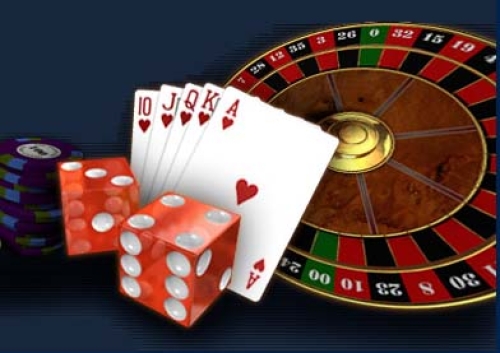 Many people argue that trading the forex market is a major gamble; because the trader has no idea where the market is going or how much it will move in a specific direction. To some extent i agree with that view, but i also know there several traders have made millions from these same financial markets. I know they did not all count on luck, rather they employed a defined trading approach and stuck to it.

This article is about my trading strategy and its performance during the month of May 2014.


My first week was an absolute disaster. I took three short positions that resulted in a 35% loss of my trading equity. These trades were taken on the GBPAUD and EURAUD. As we can see from the screen shot, i completely violated my own trading rules.

My strategy did not support any of the above trades. I was also unfortunate to set those trades just before the release of the Non-Farm Employment Change and U.S Unemployment Rate data; the surge in volatility did not help my trades. My Stop Loss got hit very quickly.

It all happened on a Friday, so i ended the week with a major deficit.

The next week, i got my priorities in order and began using my strategy. It was a slow and painful recovery, because of the loss the previous week, i could not trade with as much volume as i wanted. I began the week by shorting the GBPAUD. I had a field day shorting the pair, this time i waited for confirmation from my indicators.

That same week, i took a counter-trend trade on the EURUSD. This trade did not meet my strategy requirements at all. As can be expected, it ended in a loss.

Thank fully, the loss was not as heavy as my previous losses. If there is any thing i learnt in the month of May, it is not to trade against the trend.

During the third week in May, I had to employ a fair amount of discipline. As much as possible, I made sure I took trades that were in line with my chosen strategy.

During that week, i got a signal to sell the GBPCAD, i made 41pips from that trade. That trade could easily have been my best trade for the month, if only i had let the trade "run". I realized that sometimes it is necessary to be patient to maximize the profits from a trade.

I also observed that the Australian currency was showing a lot of weakness, so i took two trades against the currency.

I ended that week on a very happy note. i had recovered from my deficit, and my account was showing profit. 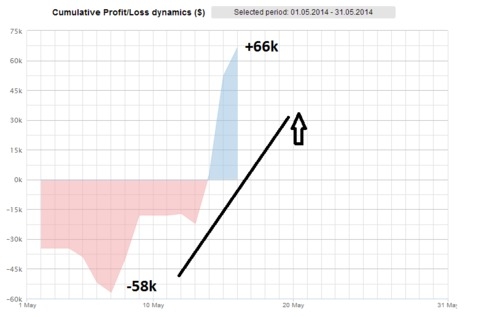 Things really got interesting when i continued my campaign against the Australian currency. I took three trades; sold the AUDUSD and bought the GBPAUD and EURAUD.

The GBPAUD trade is in-arguably my best trade for the month; all the indicators agreed perfectly and i made a bountiful number of pips.

Not all my trades went so well. There were a couple of trades that ate up most of the profit i had made during those first weeks. looking back at those trades, the reason for their failure was rather obvious; they did not meet my strategy requirements.

In my humble opinion, counter-trend trading is like trying to catch a falling knife. Every time I opened a counter-trend position, i took a loss. 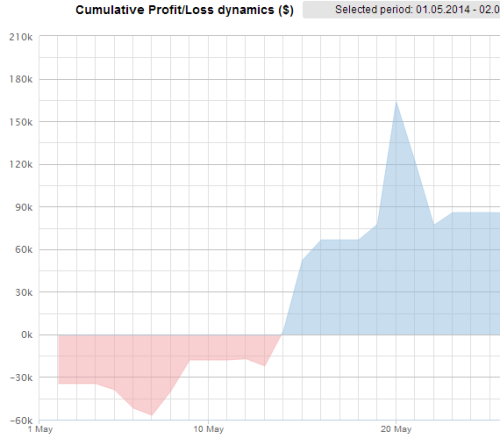 During the last week of the contest, i had to stick to the strategy that had been working for me.

I also got a signal to short the GBPAUD. That trade yielded 34pips. This trade again showed me the need to be patient with my trades, if i had waited a few more hours, i could have enjoyed the benefit of trading in the direction of the trend.

Those last trades helped me recover my balance. At the end of the trading month, my balance was at 246.24k. Below is a screenshot of how my account balance fluctuated during the contest month of May 2014. 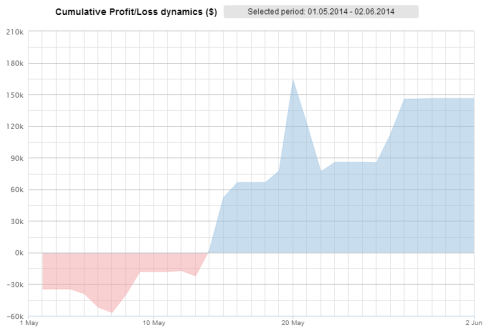 I finished 5th in the trader contest. 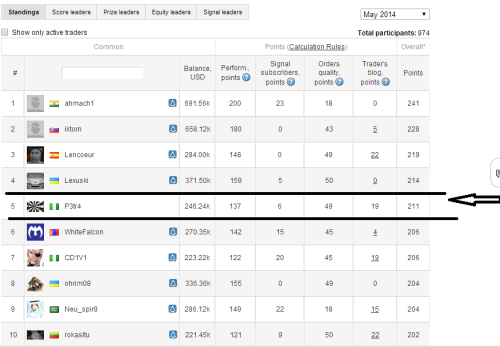 This is my second month in a row finishing within the top 10 of the trader contest table.


As much as possible, i have tried to describe the trading month using my selected strategy. By no means, this strategy is not the Holy Grail, but it is a disciplined approach to trading the forex market. Most of the losses i incurred were due to the fact that i did not follow my trading strategy all through the month.

I will let you all, my esteemed readers, decide for yourself whether this strategy is profitable or not.