gold
Now in the stages of correction to complete the climb, note that the 78.6, which rebounds from them strongly and is continuing to rise in order to complete the journey to rise to face strong resistance as shown to you in green color where we note that the rising trend over more than 10 days you break
So that has proven the strength of the direction in which you are showing the Barbolic delight and explains the continuation of the Ascending as well as shows that gold is in positive areass 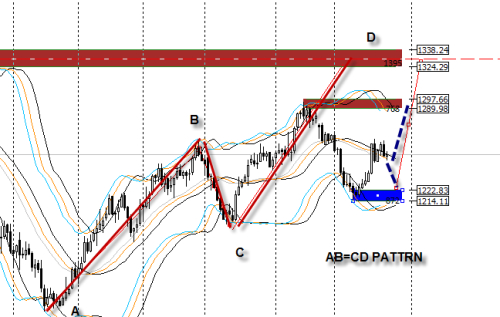 As for the Polynecker Band, we have the average band that has been exceeded and has risen strongly above it in the light of that possibility. It is a continuation of its march to the top. If a drop occurs, this means a downside correction and we note that the support you have drawn is 50-61.8 Fibonacci
Point C is the strong starting point for the pair to form the second leg that came close to reaching point D of a pattern
AB = CD
Open the daily session and decide to enter more positions with 20-40 pips in anticipation of action or any sell saturation on a smaller scale

Gold rallied strongly against the dollar, a major rally that has led to a rise in gold after the political scene has been strained in recent times to reach its highest level and other reasons. This rise is accompanied by the stability of global risk appetite and the rise in European stocks despite the existence of uncertainty about aspirations Economic growth
(Important notes please follow)))
Please pay attention if the transaction is entered into a profit please reserve the profits and close part of the contract
Do not convert your profits into losses and move the stop loss order to the entry level if the price moves in your favor to protect yourself from any possible market repercussions
Do not close your winning trades early, but be sure to book your profits until you reach the goal
Managing a strict capital means opening a deal at the size of 0.01 Lott Stender when calculating the size of $ 1000
Przetłumacz na Angielski Pokaż oryginał Toggle Dropdown