If the main macro theme of 2014 was the broad based dollar strength, the general consensus for 2015 is for further appreciation of the dollar. The implication of a strong dollar, and with the pick up in volatility, have also set in motion other trends, like the bearish commodity trends(see Metals and Oil), the carry trade has died (see AUD/USD and NZD/USD) and last but not least EUR/USD has finally started trading to the downside.

The broad based dollar strength can have a big impact on US economy, like lower inflation and this can be the trigger, next year 2015, for a considerable correction in the equity market but without altering the secular bull trend. I'm making a bold call here that the equity market will have a severe correction in 2015, once we complete a PI cycle from the 2007 high. "PI" the magic number has the following significance:

Because of the dollar's role as the world's primary reserve currency, the impact of the broad based dollar strength can trigger some "consequences" in other part of the world such as faster stimulus in Europe and in this regard my top trade for 2015 remains short EUR/USD.

Before to analyse any other pair I think it's very important to have a look just at the dollar itself as every move in the FX world will be determined by the scale of the USD rally. The prospects of higher US interest rates and with the FED moving towards interest rates normalization cycle coupled with Europe easing cycle and China tightening monetary policy and Japan QE, will cause investors to move towards higher-yielding markets. If 2014 we only had one episodic of higher volatility (see Figure 1) this is about to change as this divergences in monetary policies among developed economies will be the precursor of even higher volatility in 2015. All this are arguments for the US Dollar to continue strengthening in coming years as this is just the beginning of this new bullish cycle (see Figure 2)

Tighter monetary policies in the US will be the trigger for a massive covering of long-term positions in currencies, equities, and bonds. Usually the bonds market start selling off 3 months before the first rate hike cycle. Current FED rates projects the first rate hike in July 2015 so based on this, the US bonds should be shorted in April 2015. As bonds go lower, short term rates will go higher and this alone will be another factor in favor of US dollar strength (see Figure 3).

In the macro spectrum it's more about the dollar than it's about the euro, even thought ECB will move towards sovereign QE (they may even do it at this week's meeting, but the market consensus is 1st Q of 2015) because of broad based dollar strength ECB will be forced to do QE at a slower pace. The reason why I'm expecting ECB to start doing QE only next year is because they are still in waiting mode for the results of TLTRO programme for the December auction in order to asses the success of the programme so it may be the case there will be no new step taken, this year, towards QE. But this is just my assumption and interpretation of current data and anything can be possible. Also ECB has introduced a more explicit balance sheet target into the policy framework. The market have been running well in advance projecting this expansion in ECB balance sheet (see Figure 4) as ECB have said they are targeting an increase to match where they where back in 2012. The ECB balance sheet is a reflection of ECB stimulus in the system so this means ECB have to inject between $600B-$1T to match the level from 2012. 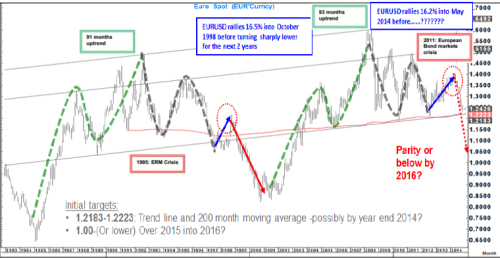 Figure 5 basically is showing a fractal that suggest EUR/USD can follow the price action path from 30 years ago, you can see that some phases are developing in some cases at different time scale but this is the nature of fractals. The final stage of this fractal suggest that we'll follow the fractal either in time or either in price:


Even though UK has posted strong growth and it's going to follow the steps of FED and move towards rate normalization cycle the thing that matter in this circumstance is the fact that UK will move gradual towards rate hikes and much more slower than their counter part FED. The second thing that matter in this circumstances are the downward pressure on inflation that are building up and have pushed further in time the first rate hike. 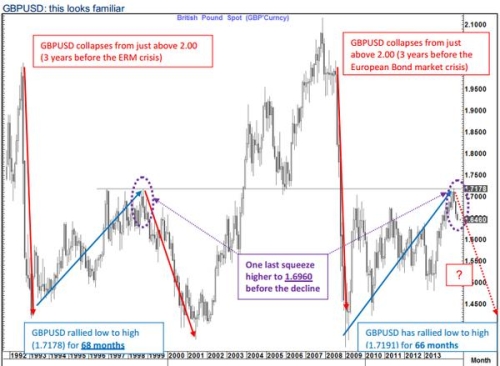 Technicaly speaking cable's price action looks quite familiar and it's a fractal of the 1992-2000 price action (see Figure 5). We can see that the massive sell off in the 90's resemble the sell off that we had in 2007-2008 and going forward both sell offs have seen a 66 months retracement. Not only that the price action looks similar but also time wise this fractal looks similar. This fractal will suggest that eventually we'll have to see another major swing low below 1.3490 before the market to enter in the next phase and the cycle to change to the upside. We also have to keep in mind that the broad base dollar strength is supporting this forecast.

In Figure 7 we can see how based on the Elliott Wave count we still need a new low to complete a five wave sequence in order to complete the cycle that started from 2007. Based on the Elliott Wave count we're still in the wave IV stage which is still not completed as so far we can see the market is trying to develop an WXY correction type. Wave Y still need to develop 3 waves of smaller degree.

With the pick up in volatility and with the broad based dollar strength the carry trade was hit the hardest during the course of this year (see Figure 8) and this is not going to change in the year ahead of us. The falling commodity prices will likely weigh on aussie and coupled with the China tightening monetary policy are other solid arguments to remain structurally bearish on aussie next year. 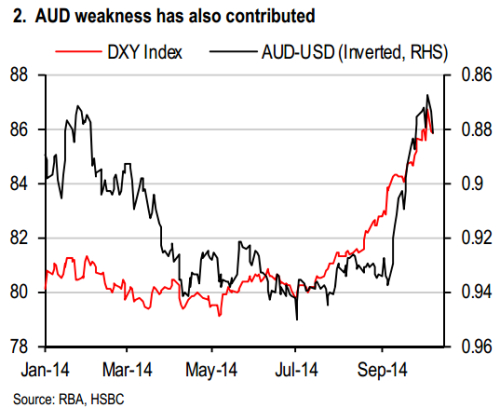 For the past year aussie was following gold up until recently when the correlation inverted and it seems that gold is leading aussie. The commodity market has already entered in a bear trend than aussie is going to follow gold footsteps(see Figure 9). Key month for gold remains Jun 2015, which based on the seasonality cycles is one of the worst month for gold. The fundamentals are also supporting this idea as based on a July 2015 rate hike, US bonds should be shorted 3 months ahead of that time which in turn will be the catalyst for another wave of US dollar strength. Gold is inverted correlated with the dollar so this will put a lot of pressure on gold.

Because of the limited space to write an article I can only say few words about USD/JPY. The additional easing measures taken by BOJ back in October coupled with the broad based dollar strength across the board suggests that the yen will likely stay weaker next year. However due to the raise in volatility we can expect sharp correction if the risk aversion kicks in.