Is the application of micro and macro economic theory in markets in order to predict future trends. The main fundamental forces drive the currency markets.

The Trade Balance is an indicator of the difference between exports and imports of goods from one country. A positive trade balance or a surplus occurs when a country's exports exceed imports. A negative balance of trade, or a deficit, occurs when more goods are imported than exported.

A country with a significant deficit of the trade balance will normally have a weaker currency because there will be a continuous commercial sale of its currency. However, this can be compensated by substantial financial investment flows over a long period of time. 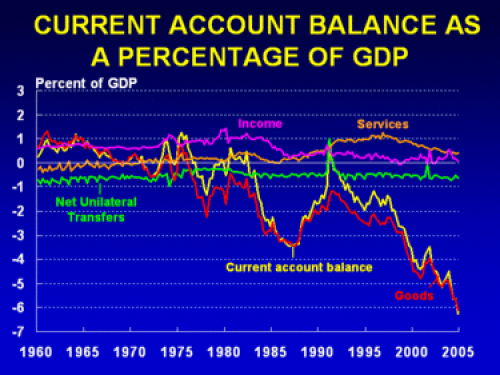 The current account is the most important part of international trade data. It is the broadest measure of sales and purchases of goods, services, interest payments and unilateral transfers. The Consumer Price Index (CPI) is a measure of the average price level of a fixed basket of goods and services purchased by consumers. Monthly changes in the CPI are communicated closely followed as an indicator of inflation.

The CPI is an important inflation indicator because consumer spending accounts for two-thirds of economic activity. At a follow-IPC is often increased interest rates higher short-term and can therefore support the currency in the short term. However, if the problem of inflation continue long-term confidence in the currency and this will eventually weaken shaken.

The Durable Goods Orders are a measure of the new orders placed with domestic manufacturers for immediate and future delivery of factory goods lasting. The monthly percentage changes reflect the rate of change of these orders.

Lasting growing are normally associated with stronger economic activity and can therefore lead to interest rates higher short-term, which usually supports a currency at least in the short term. The GDP report has three editions:

Typically, these reviews have a substantial impact on the markets.

A high GDP figure is usually followed by expectations of higher interest rates, which, in most cases, is positive for the currency concerned at least in the short term, unless the expectations of a high inflation pressure are simultaneously undermine the confidence in the currency.

In addition to the values ​​of GDP, there are baffles of GDP, which assesses the change in prices in total GDP and for each component. Baffles of GDP is another important measurement of inflation with the CPI. Compared with the CPI, the GDP deflectors have the advantage of not being a fixed basket of goods and services, which means that changes in consumption patterns or the introduction of new goods and services will reflect the deflectors.

The number of Housing Starts measure initial construction of residential units (one or several families) monthly. The number of Housing Starts are closely followed because it is an indicator of the general opinion on the economy. The high construction activity is usually associated with a high confidence and economic activity. It is considered a precursor to interest rates higher short-term, which usually supports the relevant currency at least in the short term.

The job creation (also known as the Labor Report) is considered the most important indicator among all economic indicators. It is usually published on the first Friday of the month. The report provides a comprehensive overview of the economy seen encompass all major sectors of the economy. It is useful to examine trends in job creation in several industry categories because the aggregate data can mask significant deviations in underlying industry trends.

The job creation is a measurement of the number of employees as employees of business establishments not related to agriculture and governmental units. Monthly changes in job creation reflects the net number of new jobs created or lost during the month and are followed as an important indicator of economic activity.

Large increases in job creation are considered signs of strong economic activity that could eventually lead to higher interest rates, which generally supports the currency at least in the short term. However, it is estimated that is being exerted inflationary pressure, this factor may undermine confidence in the currency in the long term. The Producer Price Index measures the monthly change of wholesale prices and is divided into raw materials, manufacturing and production phase.

The IPP provides an indication of inflation important in assessing the price changes in the manufacturing sector and inflation at the producer level often affects the consumer price index. Therefore, it is expected that an increasing IPP usually leads to an inflation of consumer prices higher and, thereby, the interest rates in the short term potentially higher.

Higher rates will often have a positive impact in the short term the currency, although significant inflationary pressure often affect confidence in the currency in question.

These factors alter the very course of the market, who likes to operate using news, it is a good opportunity to get some pips, but always be careful.