Community
Article contest
Forex Trading for Income: the Carry Trade
It’s been a tough few months for currency traders. Choppy markets haven’t produced any major trends. This got me thinking into ways to make money when the market is not moving. This is the first installment of my multi-part series on trading for income.

What is Trading for Income?

Trading for income covers a broad range of ways to make money regardless of market conditions. Trend following excels during high volatility. Mean reversion strategies do better during ranges. Trading for income is supposed to bridge that gap and offer some ‘’stable’’ income. Please keep in mind that there is no free lunch in the markets. Just like with the other two strategies, trading for income has some serious drawbacks as well. More on this later in this article.

In a previous article I went over this trading strategy is more detail. As you can read in that article, this system performed great back then, as you made money with both currency appreciation and rollover. On the chart below you can see that the GBP/JPY gained 3% in 2005, 10% in 2006 and 7% in 2007. On top of this, you would gain a juicy 3-4 percent in rollover. Add some leverage into the mix and boom, you’re looking at some high returns for no work at all.

Of course nothing good lasts forever and all this changed in 2008 as markets went into major risk-off mode. Currencies with high interest rates got sold as traders opted for the safety of the Japanese Yen and the U.S. Dollar. Some pairs like the GBP/JPY never recovered to their 2008 highs after the Bank of England aggressively slashed interest rates to record lows.

Now know the major flaw of the carry trade. Similarly to stock markets, this trade suffers during risk-off market selloffs. But what if you could avoid that faithful 2008? How would the carry strategy perform then?

To avoid curve fitting, let’s use a simple filter like a new high or low. We also want to use a rule that’s long-term so that we don’t pay too much in trading commission by constantly getting in and out.

The simple rule is:

Note that in this backtest we take only buys, because this is for the GBP/JPY. Pre-2008 the GBP was the high yielding currency at +4% while the Yen yielded basically nothing. If you use other pairs where the high yielding currency is the second or ‘’quote’’ currency, you would only take sells at a new 10-month low and close the trade at a new 10-month high.

On the picture above we can see a monthly chart of the GBP/JPY with the Donchian Indicator set to 10 periods. As you can see this simple rule does a good job of following the price higher and getting out before any major selloffs. The rule would’ve kept us out of the 2008 Crisis entirely because the GBP/JPY hit a new 10-month low in August of 2007, over a year before the major losses happened.

This wasn’t an easy exit by any means. We would’ve been stopped out at 221.07 after two months of losses of exactly 3,000 pips from the 251.08 high. To add insult to injury, shortly after our stopout prices rallied higher to over 240 Pound for one Yen. Still, ultimately following the strategy proved correct as it would’ve saved us from a loss of close to 10,000 pips in 2008. The GBP/JPY bottomed out at 118.84 in January of 2009. This crash of over 50 percent would destroy carry traders that used any leverage, even as low as 2 to 1.

After the crisis, our first buy signal wasn’t triggered until April 2011. But by this point with the BOE slashing interest rates to near zero, the interest rate differential narrowed substantially and the carry trade in the GBP/JPY was no longer worth it.

Trying the 10 Month Rule on the Aussie

Now let’s try the same filtering method with the AUD/USD. This was another popular choice for carry traders before the 2008 Crisis. Unlike the GBP/JPY, the interest differentials in this pair persist to this day, albeit at a much lower level.

The AUD/USD bounced back hard and by August of 2009 we already had a new buy signal at 0.8366. So by using this filter not only would we avoid a major drawdown of close to 30 percent but we would get back in at a better price as well.

This long trade stayed open until October of 2011, generating positive carry for over two years in addition to currency appreciation gains. Using a conservative estimate of 0.7 pips per day (back then AUD had higher rates and the USD lower), the carry would’ve yielded around 546 pips from the carry alone. In percentage terms this comes to 4.7%, without using any leverage. The exit signal was given at 0.9535, clocking an additional 1,169 pips on top of the carry for another +13.97% gain.

Since our hypothetical exit back in 2011, the Aussie had a bad time. Prices hit a low of 0.6826 this January. A carry trader without an exit would’ve experienced another severe drawdown of 28 percent. The AUD/USD is currently trading at 0.7643, still almost 1,900 pips below our exit.

As a general rule, strategies that attempt to make a small amount of money in a consistent manner will experience large drawdowns at some point. In our GBP/JPY example above, from the 251.08 high in 2007 to our exit at 221.08 we would’ve experienced a technical drawdown of close to 12 percent. We say technical because our entry to this long trade was back in 2004 at 199.72. This drop of 12 percent was basically losing half of our open profits.

However large losses of this magnitude are certainly possible at any point, including right after we open a trade. In fact, false breakouts are one of the major disadvantages of trend-based filters like the 10 Month Rule and several losing trades in a row will happen at some point.

In addition, while the 10 Month Rule performed well in recent history, this is no guarantee that it will continue to do so. Backtest and verify everything for yourself.

From a fundamental perspective, since 2008 interest rates have been on a downward trend across the world. This means that profitable carry trading is getting harder. 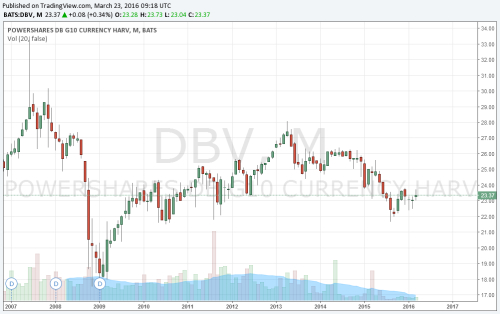 The chart above shows the Deutsche Bank G10 Currency Future Harvest Index, a good proxy for the performance of carry trades. As you see, the returns of this strategy excelled right before the 2007/2008 Financial Crisis and tanked right after.

Hopefully some of my tips will help you counter these negative headwinds. Let me know if you have any questions below.
Translate to English Show original Toggle Dropdown