The results of the first quarter

The first three months of 2012 will be remembered traders with conflicting
economic data. On the one hand, the U.S. economy continued to recover. On
the other hand, there have been alarming news from China, as well as disappointing
news about the economic state of the eurozone. Among the main drivers of
financial activity in the first quarter were also geopolitical risks and
concerns associated with sovereign debt crises.

U.S.
stock markets have shown impressive results, approaching levels where they were
before the bankruptcy of Lehman Brothers: the S & P gained 14% while the
NASDAQ rose by 18%. Brent crude was trading at around $ 125 per barrel. Price
increases contributed to the tense situation in Iran, and constrained them to talk
about the possible opening of the strategic oil reserves. High oil prices have
a negative impact on global demand and the economies of developed countries.

To begin to say a few words about how to develop the economy of the United
States, the eurozone and China since the beginning of this year. 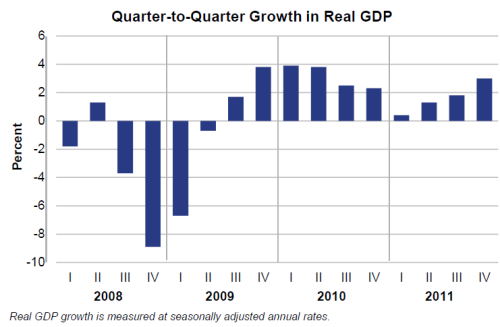 In the manufacturing sector
and services sector observed a brisk business activity, industrial production
gained momentum during the three months to March. Status of the U.S. labor
market also improved. By March the number of applications for unemployment
benefits has reached its lowest level in four years. The number of jobs in the
winter grew on average by 200 thousand per month and the unemployment rate fell
from 9.0% in September 2011 to 8.3% in January and February 2012.

However, it should be understood that the sky over America is not straightforward. First,
States are not insulated from the rest of the world, which is currently not
experiencing the best of times, "landing" of China, will it be soft or hard, and the problems
of the eurozone, will not be able to affect the other side of the Atlantic. Second, inflationary pressures in the U.S. begins to
rise gradually under the influence of high oil prices, the trade deficit
increases, and the real estate market is still depressed.

Of course, to predict future market sentiment hard. U.S.
investors seem to reside in the belief that the U.S. economy will be able to stay
away from the world's problems, following his path and showing steady growth. World
markets - this is an extremely complicated mechanism, so it may be that they
are right: after all, a slowdown in China's economic growth will not
lead to such catastrophic and immediate impact on markets, such as the credit
crunch. If it will lower prices for raw materials, then eventually the American
economy, perhaps, receive some benefit.

In the fourth quarter, the eurozone economy declined by 0.3%. It should be
noted that one-third of Monetary Union in the last year entered into a recession,
defined as a decline in GDP for two consecutive quarters.

Unlike the U.S.,
the mood of the manufacturing sector in the region is far from optimistic: in
March purchasing managers index was only 47.7, falling to 3-month low and
falling during the eighth month in a row. The unemployment rate in the euro
zone jumped in February to the highest level in 14 years in 10.8%.

Chinese Premier Wen Jiabao announced reduction target of economic growth in
2012 to 7.5% due to the fact that the country's leadership is trying to refocus
the national economy toward domestic consumption. Prior to that, with the 2005
figure stood at around 8%. This news is extremely alarmed by the financial
markets, although the Bank of China and claim that this year's rate of economic
growth will remain above the Celestial 8%. Last year, China's GDP
grew by 9.2%.

In February, China
recorded the largest trade deficit in the last 10 years at $ 31.5 billion, this
was due to the fact that imports exceeded exports by more than 2 times. The
deterioration of China's
trade position due mainly to weak demand for Chinese goods eurozone - Europe accounts for about 20% of the total Chinese
exports. Taking into account the reduction in foreign demand, we can expect
that China's
exports will weaken for at least another few months.

In late March, a lot of fuss is conflicting evidence on the Chinese
manufacturing index PMI: if the indicator calculated HSBC, was below 50,
indicating that the reduction of the industry, the value of the official index
has been above that mark. Official data were able to slightly improve the mood
of the market, but to dispel investor concerns they have failed.

The main currency in the first quarter of 2012

The best results among the G20 currencies showed the New Zealand dollar, gained more
than 5% against the U.S. dollar. The Japanese yen has proved to be worse than
other currencies, falling by more than 7% against the American.

The U.S.
currency lost all major currencies except the yen (because of the monetary stimulus
undertaken by the Bank of Japan). The dollar weakened in January and February
and in March he was able to compensate for some losses.

In the first quarter of European politicians finally began to make real efforts to contain the crisis. During this time there was a lot of important events, including the restructuring of the Greek debt, the approval of the second program funding in Greece, as well as an increase in anti-crisis funds.

We believe the most serious risk first. Since the so-called PIIGS countries have to spend the austerity measures, it is becoming harder and harder to restore its competitiveness, which leads to a deterioration of living standards of their population and social instability. In southern European countries, where elections are planned, the odds shifted to the right wing nationalist parties. If these political forces are successful, the risks associated with the implementation of programs to reduce public spending to increase. Presidential elections in France, which will be held April 22 and May 6, also reinforce the general tension.

As a result, despite the progress made to resolve the crisis, made by European leaders in recent months, in Europe itself is difficult to find any factors that might contribute to the strengthening of the euro in the medium term.

One can say with great confidence that the movement of the dollar will depend, primarily, from further action by the Federal Reserve System. The major concerns of investors, remains the same: whether the Fed will launch a new round of QE to stimulate economic growth?

In March, Fed Chairman Ben Bernanke acknowledged that the overall economic situation has improved, but also made it clear that the central bank still has the opportunity to conduct further quantitative easing as the economy is not strong enough to ensure a rapid reduction in unemployment. Bernanke said the unemployment rate in the near future, most likely, will not be reduced. In addition, the Fed chief warned that the recent signs of improvement in the labor market may be caused by statistical errors.

Some experts say that market participants began to impose on the U.S. economy too much hope, and therefore, investors will be very disappointed if the data that will come out of the country will be worse than expected. Given the fact that the forecasts have steadily improved, the likelihood that evidence will not be able to beat them is growing.

It should also be noted that, due to the recovery of the U.S. economy, an inverse relationship between the dynamics of the U.S. dollar and investors' risk appetite began to fade. However, do not rush to take risks. In our opinion, the steady growth of the U.S. currency is possible only if the risk disappears completely QE3, in the second quarter, yet it is unlikely.

In addition, the growth rate of U.S. GDP in the first quarter could slow down. Remember that high oil prices have a negative effect on the U.S. economy, increasing inflationary pressures, as well as that by the end of the year in the United States will cease to operate significant tax benefits.