Every trader should well be aware of
the levels at which he should exit from the trade even before entering the
transaction and that is known as the ‘Exit policy’. It is always a
difficult decision to come out of the trade, either in red or in green. Closing
the trade is more of an emotional decision than opening the trade which is more
of a spot-on decision.  Our traders buy in haste and repent in leisure.

As we all know, there are only two
possibilities in a trade-either it is profit or loss. The trader should take
the decision to fix the timing of exit in either case. If in profit, when do we
book it and in case of loss how long should we wait-these are the questions to
be addressed by the exit policy. Even when the trade is in green, it is
difficult to decide the level at which the profits may be booked. Often the
investor is tempted to get on with the trade with still more profit
expectations.  If the trade is in
loss, the trader cannot carryon with his trade to a longer period as he is at a
risk of losing the capital.

Here the Fibonacci retracement comes handy
in identifying such targets & stops which can also be used as potential
support & resistance areas. Most of the forex trading platforms offer the
Fibonacci retracement and extension levels which are easy to draw - one need to
just identify the swing high & low points and leave it to the software to
mark the other areas.

When we look at any trend, up or down, we
can identify 3 stages before the formation of trend is complete. The following
figures best illustrate them: 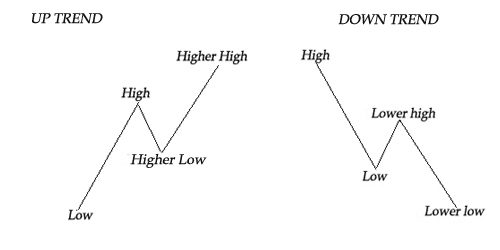 We may notice here at every rise or fall,
there is a pullback: high to higher low in the uptrend and the low to lower
high in the down trend. This pullback is called retracements and Fibonacci
series numbers helps in identifying the percentages of these levels when the
market is trending. Fibonacci retracements are drawn from 100% to 0%. Check the
following figures. 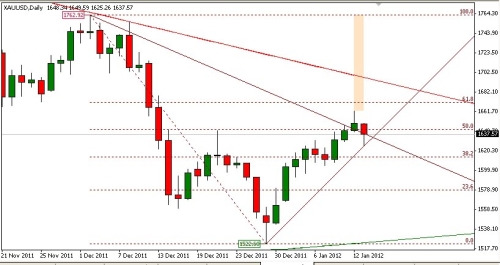 The above figure is of uptrend &

The below figure is of downward trend. 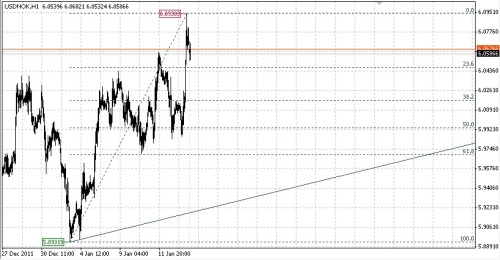 The retracement levels commonly employed in
forex are 23.6, 38.2, 50.0, 61.8 & 76.4% out of which the percentage of 61.8
is considered crucial and is referred to as ‘Golden Fibonacci number’. We can
observe from the above two figures that these are important support &
resistance levels which help us in coming out of trades either for profit
booking or placing the stoplosses. In the downward trend, if we sell at 61.8,
the trade may be closed at 50.0. Similarly, if we buy at 61.8, in an upward
trend, the same may be closed at 38.2 or 23.6. Never ever depend on one
indicator or method and Fibonacci retracements may be combined with
candlesticks to get more accurate results as the market has its own options for
pullbacks. The Fibonacci retracements may be combined with the trendlines which
complements it beautifully because of the simple reason that the Fibonacci retracements
work only in trends.

We all know that Trendlines acts as support
& resistance. Whenever the price touches the trendline, the maximum selling
& buying happens at the third such hit.  It requires much practice to draw these
trendlines. Trendlines are drawn along the lows in the downward trend and along
the highs in the upward trend. Connect the first two lows/highs and extend and
mark the third point where it is likely to re-bounce. See the following figure. 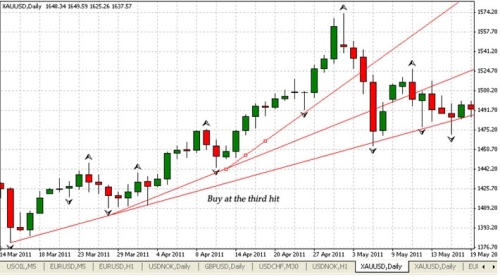 Similarly the buying and selling support may
obtained by this 1-2-3 method.  See the
following figure. 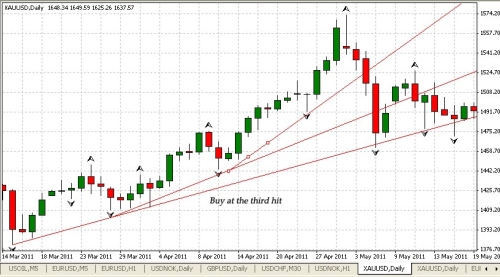 Now
coming to the crux of the matter-Placing the Take profit & Stoploss levels
in case of the right and the wrong trade respectively. If you open a trade at
38.2% Fibonacci level, then you could place the stoploss beyond the 50% or if
you feel that this level will not hold, then go past the 61.8% level. Similarly
you may place the take profit levels.

The above method may sometimes fail due to
the defect in the drawing tools or the market forces rushing in one direction.
You may then rely on the recent swing high or swing low to place your stoploss
& take profits levels. It gives your trade some chance to bounce back.

Finally, Fibonacci retracements seem to go
well with most of the pairs. It is not specific to any one time frame. Try this
method in demo & practice drawing trendlines. But readers should keep in
mind that the key to success lies with the effective money management without
which even the trader equipped with the best system in the world may fail.