Community
Article contest
False Breaks and how to Handle them
Almost anybody can recognize support and resistance levels on charts. Drawing few lines (vide Fibonacci levels) or triangle is a task that most people can accomplish. But what to do next ? Is the price going to pierce current level or is it going to test it only? Maybe price will only make a short spike and then return to the previous state (false break)?

Many traders aren’t aware that most of price breaking moves are „false breaks”( especially break against current trend) – meaning that price after making break starts moving in opposite direction. Sometimes it can be only price retracement but even though it can trigger tight stop loss orders and change small price retracement into a false break. How to increase your chances to succeed trading false breaks?


Why there are false break after all? The old trader’s saying can give us a hint: "Bulls make money, bears make money, but pigs just get slaughtered!". What does it have to do with false breaks? Pigs are considered amateur traders which usually trade advised by their emotions. Emotional trading is one of the best ways of loosing Money. Without knowledge one can be trapped looping streak that eventually will lead him to looping all money based on intuition
False breaks are good opportunities to open positions against or with the medium term trend but always with the long term trend


Bull or Bear trap are formations made with 1 to 4 candles which are drawn near the key price level. Trap show after strong moment in one direction when most traders think that momentum has more fuel to drive further. Many traders open positions In that direction after first break of this import ant price level hoping that movement will be continued. After that price starts moving In opposite direction trapping those traders on the wrong side of the market. The main cause that bears or bulls are opening wrong positions at the wrong time is emotional trading. If a trader sees that price is moving very strongly in one direction He starts feeling that movement is so strong that it can breach key level instantly. 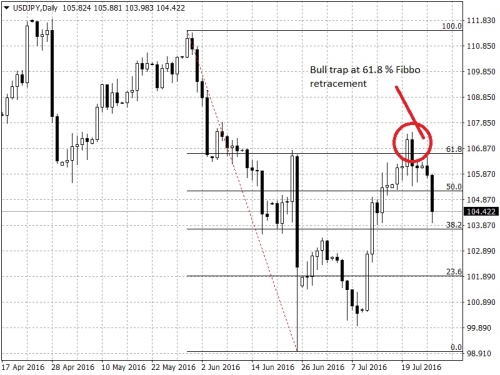 
Sometimes it happens that price is breaking from consolidation range or price channel but instead of reaching new levels it goes back to previous range. The best way of avoiding such a trap is wait until daily handle will close beyond consolidation or channel. Then you can seek another signals from whatever strategy you are using. 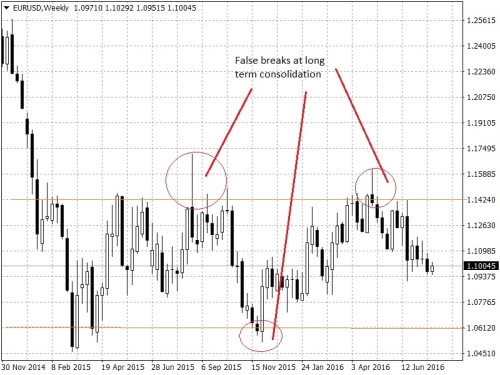 To sum up false breaks are very often appearing formation which usually causes losses to amateur traders. Emotional trading basis on feeling that trend is so strong at the moment that traders are opening long positions on rip and short on dip. Learning basics on how false breaks appear and behave will result in becoming more aware trader which leads directly to becoming professional trader.
Translate to English Show original Toggle Dropdown