Community
Article contest
EURo Makes Rallies so what next ?
1. Abstract

On December last year, the Euro was in a range area of 250 pips, and then since the beginning of the year fall into a slow decline.
The most interesting here is about cross pairs because these are showing an interesting formation.
Technical analysis says that after a rally moves up or down happen a period of consolidation comes. Then a reversal is more likely.

I want to show the same scenario to the majority of the Euro pairs because these are the most tradable. More that exotic ones.
I prefer to work with the major pairs but not with the minors because of liquidity.

The indicators used to this analysis are stochastic(15,5,5), EMA(40) and Fibonacci Levels.
As you can see the same characteristics on all of them, each pair have a particular setup to engage it.
Let's see each of them.
The realistic reward to risk ratio could be 1:1 but in strong moves, the best is 1:2 as minimun. 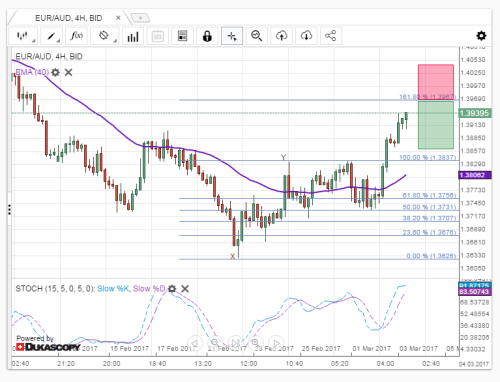 The chart above shows the price action going to touch a key level around the 161% Fibonacci Level.
The Stochastic is near to make a cross on a sell area.
A conservative approach could be put a sell limit at 161% or below the last candle low with targets at 23% or the last swing low. 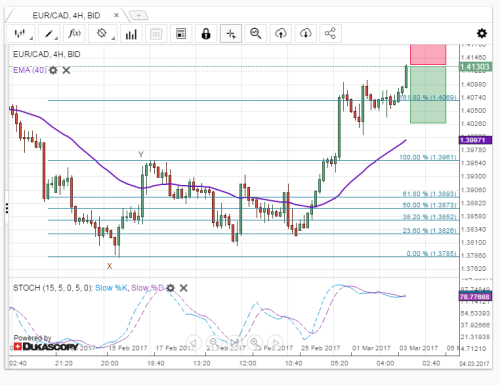 The above pair has the same situation.
The Stochastic going to the sell area and the price action going to the 141% Fibonacci Level.
A suggested setup here could be a pending order at 141% level with a stop at 188%, the target at the 23% of the retracement.
Maybe at the last swing low. 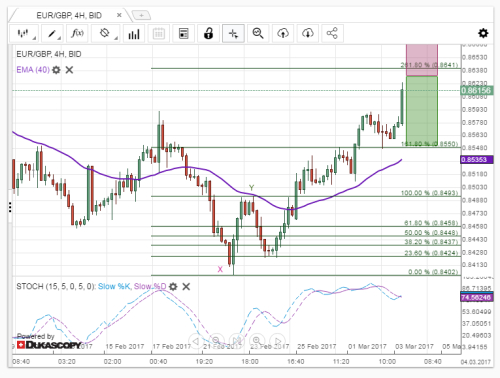 The above chart is showing us an extended move to the upside, going to touch a key level at 261% Fibonacci.
The stochastic indicator is on the level area and seems to be a bit far a retrace to occur.
A suggested setup here could be a pending limit order at 261% Fibonacci Level, with a stop around of 23% of the move.
The realistic target could be at 23% down and maybe at the last swing low.

The above chart is showing us the same scenario like the eurjpy. But in this one, the stochastic indicator is above 85 level.
So that means a reversal is going to happen soon.
The suggested setup here could be around of 188% Fibonacci or below of 261% Fibonacci.
The protective stop loss above around of a 23% of the move and a target at the last swing low or a conservative 23% of a move down. 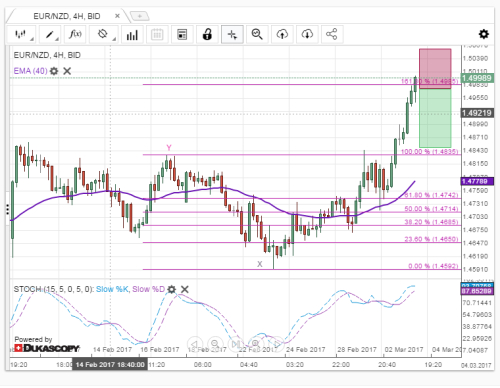 The pair above is showing the same pattern or situation.
In this case, the price action is passing a key level at 161% Fibonacci, maybe could reach the 144% Extention with some effort.
The suggested setup here is the same of the others above.
A variation could be a sell stop below the last candle low just in case of the price going higher.
If that happen the best could be to move the entry below the next candle low.
A target at the last support or a conservative 23% of the move.