Community
Article contest
EURchf Technical and Fundamental Analysis from My Point of View
I personally started trading EURCHF pair after Swiss National Bank intervention on September, 6 2011. At that time I was new forex trader and for me it was epic move. The exchange rate of EURCHF skyrocketed from 1.1018 to 1.2187 in just 3 hours, which is 1169 pips move as you can see on figure 1. Many traders lost or made really lot money thanks to this event. 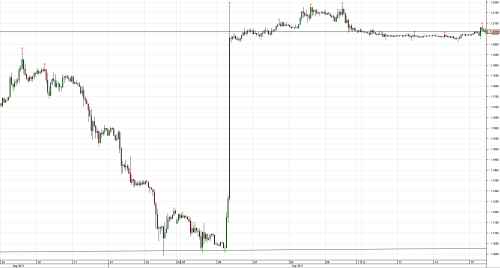 Yesterday it was just three years from SNB annoucing 1.2000 floor and market wasn´t able to break this floor as you can see on figure 2. The main question for me right now is, will SNB protect 1.2000 level this time? Will be or will be not market able to break this level in medium term perspective? What are the risks in current market situation?

Current market exchange rate is 1.2063. The most important level to watch is 1.2000, which should be protected by Swiss National Bank, many retail traders and big players, so the best level, where to put stop loss to protect capital is under level 1.2000. For my trading style is ideal level 1.1970, which is 30 pips under 1.2000 floor. So my risk for this position is 93 pips. I personally like risk:profit ratio at 1:2 at least, so my target should be 186 pips, which means level 1.2249. This level should not be problem in medium term. Market was at this level in February 2014 last time. 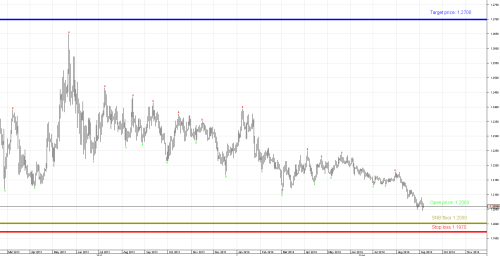 I see three major fundamental risks for 1.2000 floor in medium term. First one is the escalation of situation at Ukraine and European sanctions for Russia, which could be good reason for buying safe heaven currencies like Swiss Franc from traders and from weatlhy Russians. The second major risk i see in European Central Bank policy, which react on weaker European numbers from business, so Euro curency goes down across the board. The last problem, which i see is the fact, that Swiss National Bank already hold reserves around 450 billions of CHF, which is really lot when you realize that GDP of Swiss economy is around 650 billions of USD.

Traders always have to make decision what to believe in and how big risk are they ready to handle with. I personally still believe in ability of Swiss National Bank to protect 1.2000 floor at least in medium term, so i decided to open medium term and long-term positions. Yes, there is some risk, but on another hand the ratio between risk and profit is very well balanced. Last one and for me the most important fact is that i didnt have trade with loss at EUR/CHF pair in last three years, thanks to 1.2000 level.

And what are your ideas on EUR/CHF?
Translate to English Show original Toggle Dropdown