Community
Article contest
EUR/USD Technical and Macroeconomic Analysis
The EUR/USD daily chart is interesting to analyze in order to place the price action of the pair into a longer-term point of view.

First of all, the EUR/USD has made respective lower highs after two key political events: a. the Brexit vote and b. the US elections. As seen today May 17 2017, the pair touched the line formed using those two previous highs, but as of yet we do not know if the pair is going to break any higher without any sort of correction.

There are two scenarios supported by technical analysis. The first scenario assumes the EUR/USD is not going to close higher than 1.1123 and will remain below that level until it either breaks above the line or below current support at the 50% Fibonacci level at 1.0884.

Hint to keep in mind: A fake move above the line is also possible before the pair moves downward.

The second scenario is a clean break above the line and an upward move toward the first high at 1.1428 after the pair assumed a downward course toward the 1.0340 low. 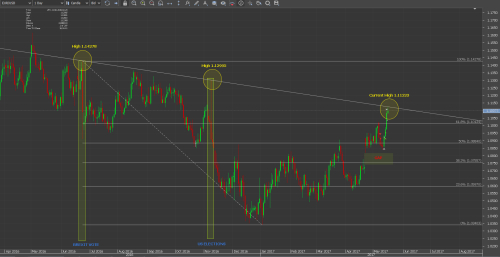 Things to keep in mind:

1. There’s a gap just below the support level, which was formed after the French-elections and which hasn’t been filled. This means that based on past price action regarding gaps there’s a good chance the pair will try to fill it at some point. This in turn means that a move below the support level of 1.0884 may be purely for that purpose and not an indication that the pair has turned bearish.

2. The observed political-events-fueled pattern in the daily chart is already altered since the third high was not formed by any such event.

3. Although the euro never reached parity with the dollar as a lot of market participants had been anticipating for years, the 1.0340 level is as good as parity based on historical price levels.

4. If we consider macroeconomic news, namely the US economy and the FED steadily increasing rates, with a reverse-lag effect in FX price action then technically the EUR/USD could easily have finished with its long-term fall and slowly starting a difficult climb.

5. The Trump presidency is one of the big unknowns in the EUR/USD price action. Certainly, any major news would impact the pair, but for a longer-trend to be altered because of such a news-worthy event might be a lot more difficult. If we also skewer any such news to be on the negative side for the dollar then the longer-term upward trend view for the EUR/USD is only supported further. Political developments in the EU of course could skew any trend in the EUR/USD in a major way. For now, it seems the storm has been averted.
Translate to English Show original Toggle Dropdown