In this article EUR/USD will be analyzed both fundamentally and technically and as known nothing is impossible in Forex so different scenarios will be drawn to express about the most probable scenarios with the EUR/USD.

What is affected the move of EUR/USD nowadays:

EUR/USD is affected now by two different and opposite policies by both European Central bank (ECB) and United States Federal Reserve (FED) and also affected by special crisis of each country of the EU which is affected –sometimes- the unity of EU and finally Euro and other currencies is affected due to strong growth in US in the last months which make US$ to be favored.


ECB was injecting EU area by quantitative easing (QE) in order to support growth and raise inflation, simply (QE) means that ECB printed more Euros and the natural reaction for this is to weaken Euro against other pairs, in last meeting, ECB still ready to inject more QE is market conditions required.
In different, US FED is ready to raise interest rate for the first time from years, FED delayed its first rate hike more than once in order to prevent broad US$ gains which may dampen US growth, this time rate hike is very near but if something horrible hit markets again, rate hike may be delayed more.


Greece is not the only EU country which is in crisis due to huge debts but Greece is the most country which hurt from its internal polices and different political and economical votes which made country to be the first country which may exit break EU unity in any time, EU helps for Greece is not enough and Greece may exit EU at any time, also Spain suffered strongly from debt, Italy is not far from crisis and so France, only Germany still far from such crisis.

EUR/USD Still stuck in arrange between 1.0500 and 1.1700 for the last eight months, also between 1.1700 and 1.0800 in the last four months, after strong losses or Euro after ECB QE, EUR/USD still not able to make clear break and close above 1.1500 after many failing tries, so in this view, different scenarios are drawn for EUR/USD movement for the last months of the year or for 1/1/2016. 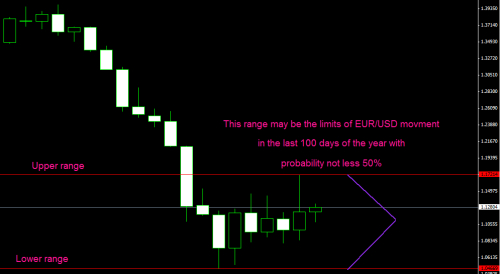 First Scenario: EUR/USD will stay between 1.0800 and 1.1700
Expected probability 10% as current range of the last 4 months should be broken due to long time before year end, we still have more 100 days before year end.

Third Scenario: EUR/USD will break higher 1.1700
Expected probability 20%, If EUR/USD can be able to clearly break 1.1700, then the pair will be seen immediately around 1.2500, there is doubts about pair ability to break above 1.1700 but everything is possible in Forex. 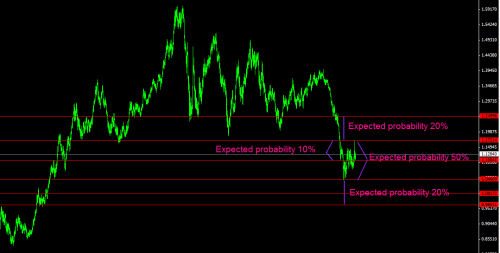 EUR/USD is highly expected to close the year below last month high at 1.1700 with probability of 80%, breaking above 1.1700 will send the pair strongly higher, the most probable scenario that pair will stay move between 1.0500 and 1.1700 without clear break above 1.1700 or below 1.0800.
Translate to English Show original Toggle Dropdown