Community
Article contest
Diversification System
While splitting money between different systems is great, just how related is each system to each other?
For example, what if I had a few systems that bought breakouts in different time-frames? So system 1 might buy a 10-day breakout, and system 2 might buy a 20-day breakout. Is this really a good strategy? My experience says no.
I like to use different styles for each system. That makes the correlation much lower. For example, the Smart Money uses data that has nothing to do with price. The Breakout system buys breakouts (although it's more complicated than just an n-day breakout). PT2 buys ahead of a breakout. Breakdown shorts breakdowns. Base Hit buys on a dip.
By throwing these different styles into the mix, you can often have a system zigging while the other zags. This makes for a much smoother equity curve.
Side note - I believe this is while Richard Dennis had a tough time getting investors to stay with him later in his career. He made huge amounts of money, but the drawdowns were large, and he did not diversify between system styles I believe (can't say for certain, but Curtis Faith, one of the original Turtle Traders was only taught two breakout systems when he was trained by Richard and Bill).
Knowing When to Fold 'Em
One important question most system designers fail to ask themselves is just when to stop using a system? After creating systems and using them in the real world, I know from experience that there are times when a system just isn't working.
For example, I might create a system with more than a dozen years of back testing and thousands of trades. Without warning, the system might start trading sideways, or enter into a normal drawdown and then never recover. A year later, the system acts like normal and goes straight up for several years.
These things are cyclical I've found. I remember several years back when traders were talking about the death of trend following. There was a drawdown for a couple years, but then those systems started putting in stellar gains. Currently, trend following in futures is behaving poorly again. Nothing new here.
What I have done to combat this is pretty simple really. I keep track of the individual equity curves of each system. If one fails to meet my criteria (which could be as simple as a long-term moving average of the system's equity), I take it out of the mix. When it starts working again, I "re-hire" it so to speak and put it back into the mix.
Advanced Statistics
When I first read about some of the traders out there making a killing in the stock and futures markets, I had to wonder how much of their success was due to being in the right place at the right time. For example, what if some of the famous trend traders like Richard Dennis or Ed Seykota didn't start trading during the huge commodity bull market?
A random look
The answer to this question can be seen if we take all our trades, and randomly scramble them up to produce several thousand different equity curves. Some equity curves might start off with 50 winning trades in a row, or some could pick all losers.
Creating these random equity curves is called a Monte Carlo simulation. 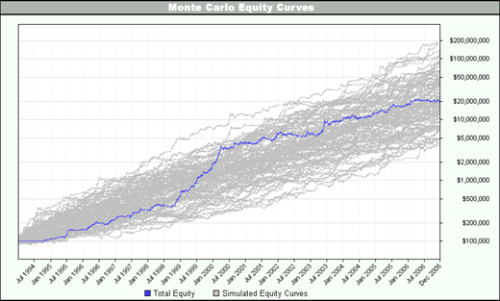 In the above example, 100 lines were drawn onto the graph. The blue line was the actual equity curve, while the grey lines were randomly scrambled equity lines based on the trades generated.
When I run a Monte Carlo simulation, I actually run 4000 different equity curves. Such a huge number a samples can allow me to make new observations. For example, I can now find what the annual growth rate of the top 90% of equity curves was. If 3600 of those equity curves made more than 40%, I have a 90% confidence level that the CAGR will be 40% or greater per year. The future is never known with absolute certainty, but this kind of simulation really dives into the efficacy of a trading system.

You can run a Monte Carlo simulation on just about any statistic you want: MAR, max drawdown, longest drawdown, etc.

As you can see, there's quite a bit of research and development that goes into not only making trading systems, but actually trading them. This is how professional hedge funds manage trading systems. The more you treat trading as a business, the more successful you will become.
Happy Trading!
Translate to English Show original Toggle Dropdown