Although, the US Central Bank left rates on hold, last week’s EUR and GBP rally against the greenback suggest the doom caused by the FOMC members median projection of rates that was cut by 50bp, leaving just two possible hikes for this year, pretty much taking out of the table any kind of announcement until September.

Over the past two weeks, the imbalance between the FED and the ECB kept widening, which means that sooner or later, the USD will outperform the common currency. However, does this sentiment imply that the rally may continue? All fingers point towards it. Consider the uncertainty surrounding the pace of rates hikes in the US and the ECB’s projection to effect easing later this year, one may only agree that the greenback may really have been doomed.

Does the 2016 composition of the FOMC members in which case they are always inclined to take a DOVISH stand portend doom?
See for yourself: 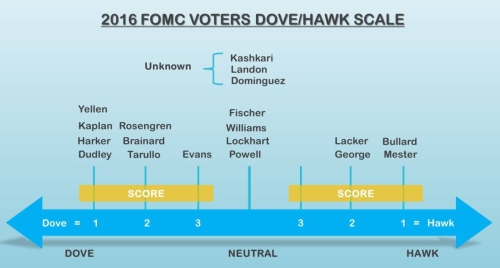 The past days have seen continued market volatility after the FED's dovish-hold on Wednesday last week, in which the FOMC decreased their expectation for hikes this year from 4 to 2. Notably, USD weakness has been a prominent theme as traders have sold out bullish-USD on the back of rate-hike hopes. These in effect has created reverberations amongst currencies and commodities.

Given the FOMC decision, which saw FED take a dovish tilt, and as no decision was made on rates, instead it did a reduction in the expected hike for the rest of the year, which consequently led to higher market volatility last week and .will still continue.

Well, the predominant post-FOMC rhetoric has been USD-weakness against pretty much everything. Now, the reality is before us all.


Where do you forecast the market will go this week?

MY PERSPECTIVE FOR THIS WEEK's TRADING FOR
EUR/USD, GBP/USD & USD/JPY

During this upcoming week, markets attention will focus on these fundamentals; the EU PMIs, and German ZEW survey. In the US, investors will be looking for the outcome of Durable Goods Orders and the ISM Manufacturing PMI. 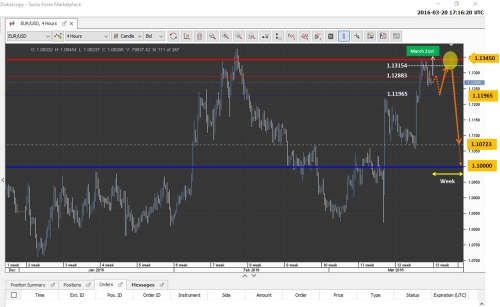 As for the technical picture of the EUR/USD above, the pair closed the week at 1.12696, the highest close since last October. However, Friday's pullback was not enough to damage the bullish tone, as in the daily chart. 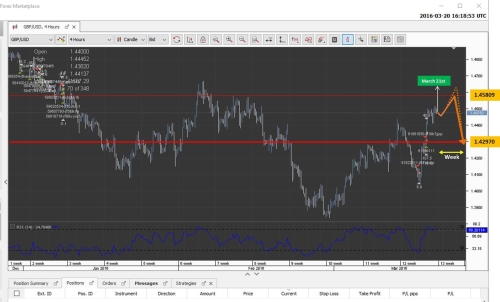 The pound staged a brutal comeback against the greenback, after plummeting to 1.4052 on renewed fears of a possible exit. Mid-week, the BOE maintained its economic policy unchanged, blaming partially a slowdown on economic growth to uncertainty surrounding Britain's referendum on its European Union membership. But the GBP/USD pair later surged as Dollar got sold-off after the FED, extending its weekly rally on Friday up to 1.4513, the highest in over a month.

Having partially retreated, the pair hold above 1.4440, the 61.8% retracement of this year's deadline, suggesting the bullish run may not be yet over.

MY WEEK's FORECAST
I expect the bullish rally to continue towards the 1.45809 region and maybe a little above it, where the market will consolidate and reverse south, targeting 1.42970 level. 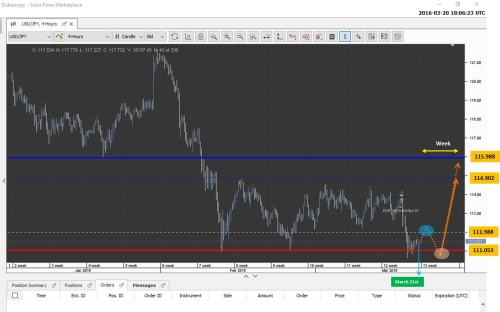 The USD/JPY came under strong selling pressure on FED-based dollar's weakness, plummeting down to 110.66 after triggering stops below the 111.00 figure. Despite improved risk sentiment, the Japanese yen surged on the back of lower US yields as the 10Y Treasury yield has fallen for the most since January last week. The pair however, bounced strongly in what the market believes was some sort of BOJ-induced intervention, by having called interbank dealers to "check exchange rates." The pair bounced up to 111.99 after the move, to settle around 111.50, unable to move far away from this last during Friday.

MY WEEK's FORECAST
I expect the pair to continue on a bearish move down to the 111.053 region a little below, after which their will be a bounce, which will sustain up till it breaks the 114.00 consolidating line towards 114.902 and perhaps above it to 115.988.


CONCLUSION
So if you ask again, Is the green back doomed?
I will answer YES, and a partial NO, as the coming week (I say this coming week only) will see the greenback show strength and beat investors expectations.


Do you feel enlightened by my article, please append your LIKES and COMMENTS.
Thanks and I wish you all profitable trades this week.