In order to make the US dollar the global reserve currency, Bretton Woods also agreed on the fixed-exchange-rate regime, meaning that the national currency was fixed against the dollar at a fixed price, and restrictions were placed on not allowing the United States to print only the amount of gold it had. And pledged to pay those who come to it in dollars to exchange gold ounce for $ 35.

The Europeans, especially De Gaulle, noticed that the dollars traded were more than the gold of the United States, that mean they used to print paper dollars without a gold cover. They demanded that they be presented with gold. They refused. and after that De Gaulle was removed from power, but they could not continue playing. 15/8/1971 President Nixon said that the United States has canceled its commitment to pay the dollar at a fixed price. As a result of this the gold price jumped to more than 10 times in months. ( and i can say this was the biggest robbery in history, an example, if I saved 350$ , worth ten ounces of gold. When the price of gold reached $ 350 per ounce, my savings were equal to one ounce. Who stole me 9 ounces of gold or 90% of my savings?

It was clear that there would be no demand for the dollar as long as without a cover, by the Shah of Iran, the United States asked that the purchase of oil be in dollars only, and thus the world had to buy dollars without cover to pay the price of oil.

Since then, currencies, as well as oil prices, have fluctuated up and down with hypothetical decisions from the United States according to their economic and political interests by a few companies in New York, and currencies and even oil have become tools that are used up and down from a group that does not exceed the fingers of the hands and the world economy is hostage in a casino owned by Wall Street banks In ups and downs. Since then, there has been a financial system that absorbs parasitic parasites that prey on the real productive economy and have increased the profits of the financial market and its owners in a fabulous way since that date. For example, Wall Street began to speculate on currencies and commodities and created new financial instruments such as trading in currencies or commodities by buying them in a country and selling them in another country by computer. A Wall Street financial company bought a supercomputer More than $ 25 million to be faster than half a second of other computers.

Wall Street also invented what it called junk bonds, which it called unsafe tools used to buy real companies, causing the 1987 stock market crash. After the use of those shares was canceled, they were replaced with other derivatives, which were a major cause of the collapse of 2008 , Whether in the collapse of 1987 or 2008, the US government compensated, assisted and saved the Wall Street money houses that caused these crises. The victims were hundreds of thousands of Americans who lost their homes and forcibly removed them and brought them back to the same banks that caused their catastrophe.

With no more than 10 people sitting in a basement in a New York building, they decide to collude with the US Treasury to attack the economies of other countries either for absorptive economic reasons or for political reasons.

As interest rates in the US are low and Mexico is high, it has been an opportunity for US fund managers to do arbitrage, borrowing Money in united stats and investing in Mexico. And so on The flow of money into Mexico began and American financiers and fund managers created the big bubble. and during the attack on the Mexican market was that stock prices there quadrupled within 2-3 years. Offshore investors controlled about 50 percent of the Mexican stock market and about 25 percent of the government's short-term debt before they decide to leave Mexico with their money and destroy its economy leaving it as a dead body. International financiers inflate the bubble until it is inflated, and they are blowing it up because interest rates have been rebounding in the United States and glowing more attractive investment opportunities elsewhere in the world.

When interest rates rose in the United States from early 1994, Mexico had a reasonable amount of foreign reserves of $ 25 billion, but the continued emigration of speculative capital of international financiers depleted the above-mentioned reserves and by the end of 1994 The Mexican national currency lost is about 50% of its value within a few weeks, resulting in economic meltdown eating green and land. and It was estimated that an estimated $ 50 billion was needed to halt the disastrous decline of the Mexican-Mexican peso and restore the economic system.

and here is some of the catastrophic results after this : 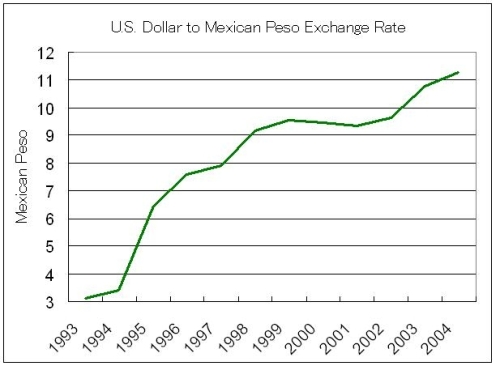 The bottom line is that The United States has achieved through the means of speculative money what it has failed to achieve by diplomatic means or brute force .

At the end i can say the beginning of national liberation to any country begins with the emergence of the hegemony of the dollar and the global financial system that prying on the productive economy.
Translate to English Show original Toggle Dropdown