Community
Article contest
Cot Reports and Their Use in Trade
In order to be more successful in trading, a trader must be armed with many tools and information, on the basis of which he could draw conclusions about the current situation in the market and about his future movement. One such tool is the weekly report on open positions of traders COT (Commitments of Traders).
The market must be regulated, otherwise it will be in chaos! In order to make the market more transparent, traders constantly report to U.S. Commodity Ftutres Trading Comission (CFTC). Thus, in public access, anyone can look at the information on the instrument of interest.
Reports are posted on the CFTC Commission website. To view the report, click on the link.
Report structure
For example, take the block of the report, which provides information on the Euro. This information (see the figure) is presented in the form of a text report indicating the number of open positions (contracts) for the purchase (LONG) or the sale (SHORT) of futures and options contracts, as well as their change (CHANGES FROM) relative to the previous report. The SPREADS column contains the number of opposite positions. In the TOTAL column, the total number of positions is stored - separately for LONG and SHORT. Positions, in turn, are broken down by the types of traders that provide reporting. They are large market players, consisting of Non-commercial (large speculators), Commercial (operators or hedgers) and all the others (small ones) that do not fall under two nonreportable positions. 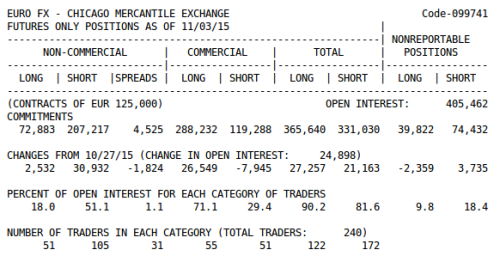 The report also has an open interest and its change relative to the previous report. Finally, at the very bottom, you can see the number of reporting firms, divided into
The Commercial group is the most significant. These are big players that have a direct relationship to the traded instrument and, in fact, know everything about it. Therefore, they can with certainty know whether the tool will grow, or fall. In this case, futures are used by them to hedge their risks. In other words, if large players sell the market is growing, and vice versa. If the representatives of the Non-Commercial group buy, then the trend is coming to an end, because the task of the latter is to make money on the current market movement.
The report usually leaves on Fridays and contains data for the previous Tuesday. Despite the fact that the data is quite outdated, nevertheless they do not change the overall picture.
Use in trade
All this is good, you will say, but how to use it in trade? After all, everyone around has this information, but for some reason, in the end, about 90% of traders lose their capital? We'll figure it out.
Firstly, as I said before, commercial participants hedge their positions. Therefore, it would be logical to follow their example. Or rather act the opposite. But first we need to calculate the difference between long and short positions. To schatyu there are resources that have done this work for us. And we do not need to exhaust ourselves with calculations. Here is one of these resources - myfxbook. This page presents graphically information from the reports in the context of the main traded currency pairs. Each new point in the chart corresponds to the same difference between the positions on the date of the last report. Let's take a look at the euro chart 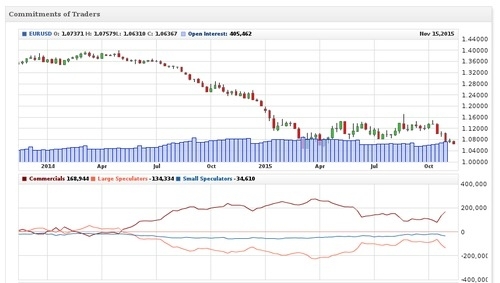 It can be clearly seen that for the last two weeks the net position of commercial traders has increased, while the non-commercial position has fallen. It is also easy to see that the direction of the price chart is directly opposite to the chart of the net position of the Commercial category and coincides with the Large Speculators (Non-commercial). Therefore, it would be logical to conclude that if large speculators sell more than buy a bearish trend. And since to go against the market is not the best idea you need to follow it and sell it. What actually now everyone does.
Here we need to make an important observation. Large players use "deep pockets" and their deposits are able to withstand large movements against their positions. What can hardly be said about your deposit. Therefore, follow this rule with extreme caution! And you just need to additionally add to your trading system any indicators that indicate the end of the trend. You also need to be able to see the moment of capitulation of large players.
Translate to English Show original Toggle Dropdown