Community
Article contest
Considerations to Be Made when Trading in Emerging Markets
Introduction:

Sparked by a most interesting conversation in oneof webinars recently, I decided to dedicate some time in explaining why, when
trading Emerging market (EM) FX, you should take more care and most certainly take somewhat of a different approach. Via dukascopy there is plenty of opportunity to gain exposure to the EM world, they offer CCY's such as MXN,
PLN, RUB, TRY and ZAR. While each have their own varying features, a different approach needs to be considered.

This can broadly be considered as unexpectedrisks, and yes these occur in G7 majors, but are much more prevalent in
the EM world due the rapid expansion of their society - these can range from political risks to rapid changes in the structure of the economy. But furthermore we know that due the lower liquidity seen in these pairs that small
shocks can result in large price changes and so if one is to trade EM's they need to be familiar with the calendar of macro indicators which is somewhat harder to come by than those for G7 nations.

Undoubtedly, fundamentals and money flows aremore important in the EM currencies than in the majors. While of course
fundamentals matter for the Majors, Technicals are more respected and so can be considered. Therefore we need to have a firm grasp of the fundamental drivers of EM CCY's. We also need to accept that Central Bank intervention is far more common, just consider the recent interventions from both Turkey and Brazil to calm the sell-off in their respective currencies.

I firmly believe that central banks have a muchlarger role to play in effecting currencies in the emerging world than opposed
to say the ECB for the EUR. However Global macro conditions are also key to consider, with the Fed looking to tighten over the coming few years seeing US rates rise we would expect to see, Ceterus Paribus, less demand for EM FX as yield spreads dramatically tighten. This means that EM central banks would need to react to at least a greater degree to see their currencies perform well.

One of the main themes this year can be seenthrough one simple chart, this shows the inter relationship between the US rate
expectation and the impact on the EM world.

In Green we have Emerging Market 1 Month volatility, in Purple we have the US 5 Year benchmark yield and finally in white we have Brazilian CDS'. The Fed is therefore critical for Emerging market direction, this is because of the liquidity premium dollars command over the EM's, while volatility is a neutral aspect of an asset class, with regard to a risk-sensitive currency, high Vol = Lower Currency value, this is due to a flight to the liquidity and safety that the USD commands. Furthermore, with the 5 yr yield rising there is less of a funding aspect to the USD (with tightening yield differentials).

If we can accurately see how the future of US monetary policy is to go, then we can easily trade this thought via EM CCY's, With dukascopy Spreads at 3 for USDTRY, 50 for USDMXM, and 43 for USDZAR there has never been an easier time to
trade in these currencies, whether you're a news driven scalper or longer term swing trader, lower spreads are always good.

Carry is a key factor of the way EM's trade, due the fact that ZAR, TRY, RUB all pay close to 5% in carry per year means that the pairs are high beta - that is will react with a larger % change to a given event. We can consider the recent FOMC surprise that there will be no tapering right now. The TRY moved 2.4% on this news, this would the same as the EURUSD moving about 325 pips, so a pretty huge move. However with a higher beta, comes much greater risk.

This being said, in relative periods of calm, a higher yield on the EM side will result in more demand for the currency in order to buy debt denominated in said currency, or to attain more yield from holding one currency vs.
another. Recently we saw the opposite occur due to the current nature (fragile) of the EM world we are in.

Here we can see Emerging Bond prices in Blue (inverted to show yield) and the USDTRY fx rate. The inital reaction was that both EM yields fell and EM FX rates rose. This was because of the risk on /risk off idea that the tapering
had put in place whereby higher US rates would lead to an exodus of capital from the EM areas and thus cause economic problems. So the delay of tapering put more faith in the EM world, this is unlikley to continue as there are very few good scenarios for the EM countries. Consider Brazil, slowing growth, potential high inflation, they've been looking to strengthen their currency to prevent cost push inflation damaging their consumer base. But in the process of raising the FX rate vis international swap lines and raising rates they've put
growth prospects in trouble. 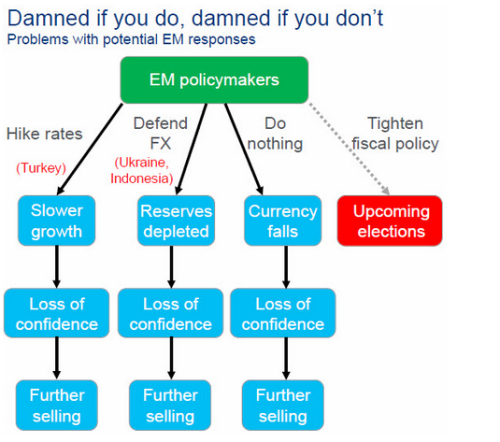 This flow diagram courtesy of Citi shows that regardless of what the EM does, it will likely result in a weakening in the FX rate. Bear in mind for the past 10 years there has been a huge inflow of investment and capital into EM countries, but as growth picks up in the US and rates start to rise, the marginal return drops hugely and so investors pull money out, this links back
to the concept of cross-border money flows being a huge factor for the EM FX rates.

This idea can broadly be summarized in one chart. This compares the USDBRL spot prices to 1 Year Non-deliverable Forwards. It should be noted that the majority of volume in the EM world occurs through NDFs.

Here we have the 1Y NDF as Candles, the Spotprice in purple and the spread in blue on the bottom pane. We can see that there was significant inflows from 05 until 08 where the global credit crisis saw a flight to liquidity. But right now, the blue line is rising at some rate
suggesting that there is going to be pressure on the BRL for the coming year as the NDF - Spot spread widens.

In conclusion, when trading EM, there are many more risks than just trading the EUR, GBP or whatever, and you need to seriously consider entering EM positions unless you fully understand the risks - even then the Leverage should be kept
to a very minimum.