Community
Article contest
Are you a Lion or a Gazelle in Forex ?
Preface

Do you know that the gazelle speed is approximately the same of the lion speed and sometimes it is higher, that's right, but often the gazelle will be the best food for the lions. Why? If you play with your friend and you want to catch him and you know that your speed is less than his speed .what will you do? It is sure you will deceive him or you will never catch him, that's the story of Lion and gazelle and we will project this in Forex traders -the winners and the losers- . 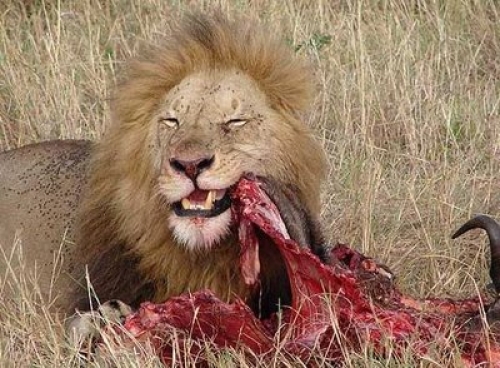 How to relate this to Forex :

Let's said that gazelles numbers in any forest is much higher than lions numbers, that's the same as Forex market where losers is much higher than winners. Below we will show the similarities between (Lion- Gazelle) in forest and (winners-Losers) in Forex.

In the wild, lions tend to pick on the animals in the herd that are weak, old, sick or hurt. Even with the strength of their numbers they will go after the easy prey. They spend their time focusing on how to take down the targeted prey with minimal effort and stress. (reference).

In Forex, the winners also used their minimal efforts and stress to win because they know exactly that effort and stress usually makes you go in the wrong side and it moves you quickly from lion to gazelle in Forex market. Believe me in the Forex forest there no mercy and the lions never sleep they want to catch you so you should be prepared for attack at any time.

Do not be an easy target :

In Forex you should be prepared to win at the end of the battle ,every trade you enter is a battle for you, when you enter a trade from good point with optimal target take profit and stop loss, you will be a winner of the market even if the stop loss is hit because you lose but you are not killed (that's different) because if you do not put stop loss, that's means that you will not survive in the forex forest and lions will attack you quicker than your expectations.

Do not freeze in your position :

When Gazelle sees a lion monitor it, it freezes in its position for a while (may be seconds) but this little time may be enough to be a dinner for the lions.

Yes, that's happened in the Forex forest, you see clear signs that market trend is changes but due to your opened trade you freeze in your position and you may make new trades in the same direction of your trade to adjust your average but the result that you accumulated your losses because you freeze like the Gazelle and you give your money easily for the lions of the market. Consider the market as a taxi, you should be in the taxi to win (remember, you will never be the driver) go with it as it goes.

Do not look behind you :

As I said above Gazelle speed is the same of lion and it can run quicker than the lion but often the lion attack the Gazelle, when Gazelle runs, from time to time, it turns its head to see where the lion behind it, and this consumes time of escape for the gazelle and it so it eases the effort for the lion to catch and eat it.

Really that happened typically in the Forex forest, losers often get affected by the last trades they made (wins or losses) and they behalf according to this effect. As example loss in the last trade will make the trader enter the market quickly to revenge (without strategy - without valid entry point or stop loss) and lions will attack you quickly and will be out of the market.

Every trade is your Battle :

Every trade is a battle for you, if you win in the last trade, okay, that's good, forget it, wait your trading plan to give you a new entry point to enter in the next battle.

The same if you lose the last trade, okay, that's the nature of life, no one can gain and gain without any losses, forget it, wait your trading plan to give you a new entry point to enter in the next battle. The important is not to revenge but to be prepared to revenge.

In this market, the good result for you is to get the best profits at the least efforts and stress. Remember your job is not to enter the highest number of trades but to make the highest possible profits. Do not be as easy target for the lions of the market. Stick to your reliable entry point, target take profit and stop loss. Do not forget, every trade is a battle for you so try to win the battle.

Be Lion and do not be Gazelle