Community
Konkurs na Artykuł
An Explanation for Trendy Bitcoin Prices
Multiplier effects exist in the economy because a dollar saved is a dollar earned, but a dollar spent that doesn’t get consumed grows. For example, when a film goes into production, most of the financing is done with pre-tax dollars that are sold to free investors at a discount. The incentive is the tax savings. It’s hard to say how the investment is creating a specific multiplier, but it is well understood that these local tax savings create pockets of spending where the production is shot. Let’s say a film has just received a local grant or stipend of $10,000. This money will be spent almost entirely in the local region where the film set is at. If the production goes to Germany, which is common due to good tax incentives, that money is exchanged for £8,300 and spent in the location of where the film is being produced, in this case, somewhere in Germany. That is a new injection of cash, which goes into the entire cycle of a multiplier for consumption. One important part of the divisor for calculating the multiplier is the “Marginal Propensity To Consume”. The multiplier for consumption is calculated as follows: 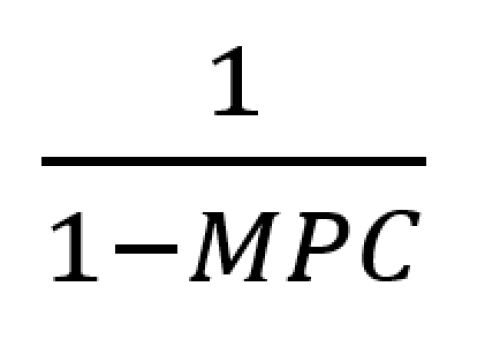 Let’s say the marginal propensity to consume is equal to 95% of a single dollar of earnings or new capital, cash, etc. The formula would be calculated as follows:

Theoretically, every dollar injected into the economy would result in $20 of new income that gets added to the Gross Domestic Product (GDP).

Other multipliers exist, for instance, there are multipliers for imports and tax savings.

The concept of the multiplier effect is important to understand because this is how industry is able to create the illusion of better discounts and/or credits for the products. A good example is the grocery store. Traditionally, grocery stores have had a strict price for its groceries, but have become transformed to a confusing set of club prices that are an advertisement of a single grocery store’s club membership. This helps customers receive discounts and sales for their purchases in what is normally a very strict shopping expenditure for food and consumer staples. Because multipliers exist, but are not generally spoken of, or proven to exist, grocery stores have found ways to inject new cash to their stores, regardless of price discount. These incentives are done through member freebies. Each supermarket has its own giveaway or freebie that brings customers into the store with new money that is generating more sales and spending at that grocery store. Abstracting this example for the entire industry means that when governments inject new money with federal stimulus consumers generate a multiplier effect for the entire economy. This can happen through consumption, tax savings, or through net exports.

Now, imagine a currency where this freebie has unlimited supply, like digital currency… here we see a multiplier effect that is potentially limitless. Because the “freebie” in this case needs not be exchanged for dollars or consumed. A possible explanation for bitcoin skyrocketing so high without any real cap on the upside is this radically fast multiplier effect where the currency—the cookie, or the thing in the middle—has an unlimited supply and need not be consumed. In essence, it’s an ethereal currency with a potentially limitless multiplier effect. The only reason why it has an exchange value is mere convention, the units of supply is completely arbitrary and derivative. This is because the currency itself is perfectly divisible and doesn’t have a chance for scarcity. This is potentially one explanation as to why bitcoin prices have risen in price at such an accelerated rate.
Przetłumacz na Angielski Pokaż oryginał Toggle Dropdown