In my experience I had to challenge with my lack of confidence; by default, I'm unable to believe in a move: since every single pip, can be a reversal point so why a move could be more than a single pip? The point is: there are some pips more important than others! What we have to do... is just learn how to recognize them, to define our entry and exit plans. I will never consider entry and exit separately, because I believe if I can't define an entry I simply don't open the trade! While on the other hand, makes non-sense opening a trade without knowing where target profits and stop losses.

The hope of this article is to give people an idea about the meaning of the sentence "plan your trade and trade your plan".

As everybody (should)know, market moves are not done by candle-stick shapes, lines, indicators, or anything like that. Truth is that a price, at a certain point goes (for example) up, then at another point goes more up or goes down, in correlation to fundamental changes. It's simple like that: if a price always reversed in a level, means that until overall conditions that held price into that area will be true, price will not breakout. As always, since I'm considering a concept and not a particular instrument, I deleted any indication from charts. I will try to explain things like I saw them while happening. 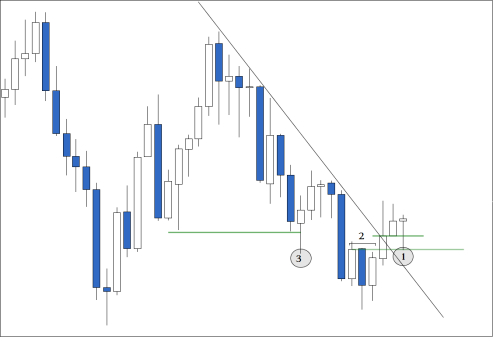 We see how the closed candle found an important reject (1) when approaching a 3xmonths high (2) and also a strong previous low (3). With green lines I drawn where are main possible new supports, meaning the levels where looking for possible reaction in price for further advance upward during the new month. Those levels where until price will stay above, will more probably going up while if and once below, will suggest a bearish pressure. In two words: key levels.

In this faster timeframe, these key levels (1/3) are also confirmed bye a 3xweek support (2) which was then broken down and then re-broken up. This happened while price reached previously seen monthly support (A/B and chart 1-1/3). This suggest me that I will probably find price again near key levels during the month. 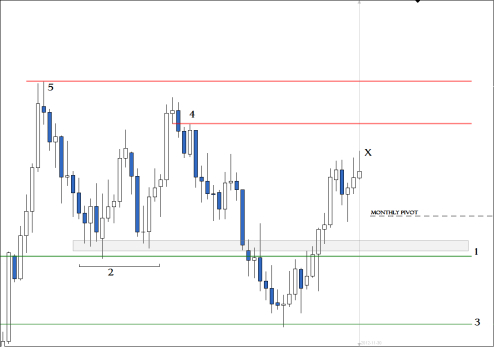 In this daily chart I didn't add a lot of things, just 2-3 lines. Since the study is done on a monthly view, I'm interested to analyze price if and when will be near my monthly key levels, so in this case I added the monthly pivot and the 2xmonth top price (4/5). Still my favorite area is the gray rectangle (1). We are now in X and from my point of view it is not an interesting price, because I see 49,9% probability up and 49,9% probability down so I decide to stay out and wait what market will decide. My study is done, I am not in hurry to open a trade until I see what I need to see. 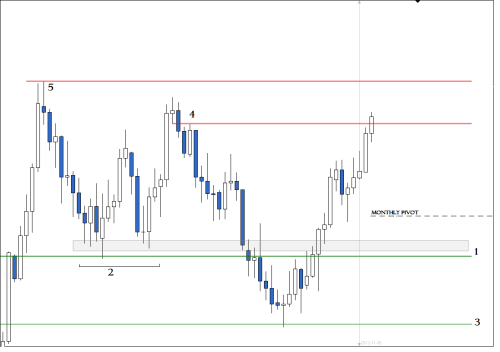 Two days later price has reached the 2moths top price area (4/5). Into this area is possible to find pressure down (so called 'supply') but is also true that main direction is actually up. It's time to switch into a faster timeframe to understand if price is weakening or what. I summarize now, saying that in my opinion price was not so clearly showing weakness so I did not open any short position. I'm trying to respect some trading rules, so since my plan is to look for a long near (1) or (2) or (3), I will only wait those levels to come. 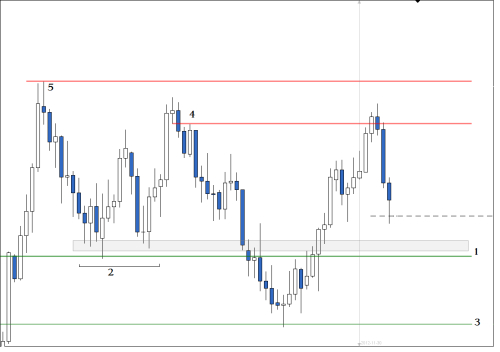 Finally 2 days later, price is reaching my interested levels. As we see there is still a bit of space to be filled but this is clearly the perfect time to switch into a faster timeframe and look for a bullish reversal. 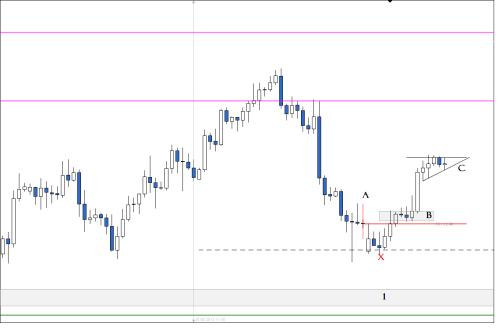 This chart to show the importance in waiting price to show intentions. As said, my plan was to wait level 1 to be reached but this did not happen. This is not so much simple as it could seem now looking with the action done. At the beginning of the week (A) price went down again near monthly pivot (redX) and the very first sign of further advance was during (B), when price conquered the area above weekly opening price. At this point I still was waiting a possible move to meet my area (mistake?) but price went impulsively up till (C) where I finally decided my entry. I am conscious that during these moves everything was possible and also I know there are people who got more than 1.000 profitable pips during these swings, becoming rich (...). But I also know there are people who almost lost a whole account because of 50 wrong entries and following stop loss.

As mentioned above, makes non sense to open a trade in a level without knowing where to target profits and where eventually stop losses. Once we know about the entry, it's extremely simple to know where plan exit points.... 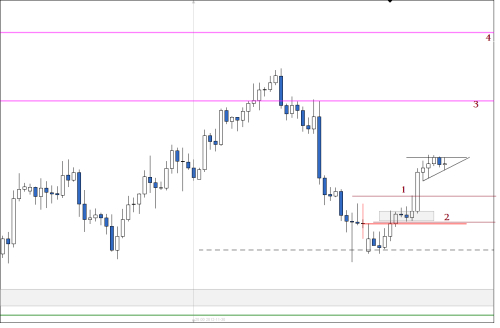 The chart is very clear to me , and this is actually one of the best setups long we could find in a price.

At this point everything is done, and here below is seen the following develop in price and how I executed the trade. 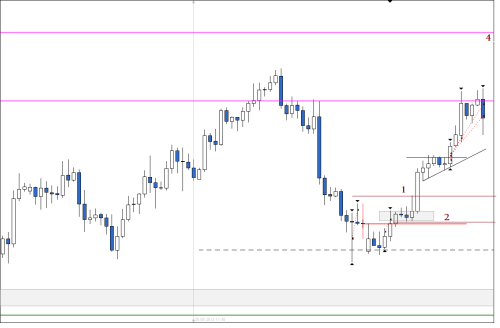 I moved stop loss to entry point, after the 'bullflag' breakout and took profits near (3). My plan was to hold a portion till (4) but then I decided to close it whole because of a simple reason: it's an important monthly top price (see chart 1 and 2) so there is no need to hold a trade thinking on a breakout of such an important level, and a reverse could erase all the profits in just 1 candle. If reasons will allow price to go more up, I will then find more entries later... higher or lower!

Price could develop differently from our plans like it did in this case reversing few pips above my entry area, but definetly we have to learn to recognize those key levels where is more probable to identify a reversal or a continuation pattern. A clean study will give us a great perception of what is happening and if we learn to build our plan and wait patiently price to develop, will be slightly easier to finish the day/week in profits.

Thank you for the attention.

Good luck in your trading!