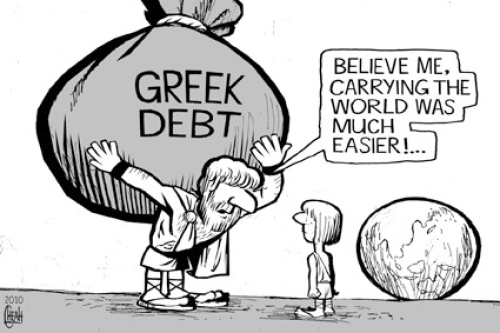 Because Greece is one of the most watched economic events in the past weeks, I want to talk a bit about the history of the Greek economy. This country isn't in this debt problem by chance of course, it has a track record of problems. Let's get started from the beginning.

The economist Charles Bullock has published an interesting essay on an economic experiment made by Dionysius the Elder, which was the ruler of the Greek city state of Syracuse from 407 B.C. to 367 B.C. What this leader did was to print more drachmas, which was the official currency of Greece during several periods in history, after he ran out of debt to fund his military campaigns. Because nobody wanted to lend him anymore money he forced his citizens to hand him all their money. Like this wasn't enough, after all the coins were collected he simply restamped one drachma coin as two drachmas. The problem here is that just printing more money was not a reliable way of creating more wealth. So Greeks have made a mess when it comes to economy for a long time.

Coming to a more contemporary timeline, if the Greek leaders had learned something from the past they would have not embraced the Euro as the common currency of the zone. This is the main issue when it comes to the current crisis. Even if it reduced the trade costs among the Euro zone countries, increasing the trade volume, this benefit had it's own trade-off: labour costs increased more in smaller countries like Greece relative to the main countries as Germany, making the Greek exports less appealing. The result of this was the increased trade deficit of the country, meaning that the consumption is greater than the production, which leads to borrowing from other countries.

After the financial crisis of 2008, Greece has faced an investment stop because of the increased borrowing costs, meaning that it cannot borrow further for the financing of the trade and finance deficit. Normally, a country which is facing this type of issue will allow its currency to depreciate, to pay back the debt in a cheaper currency. But there was a problem, Greece is in the Euro zone and this is not an option. What they did was to allow the wages to fall almost 20 percent from 2010 to 2014 as a form of deflation, which lead to a decrease in income, increase in unemployment, a recession and a rise in debt to GDP ratio. 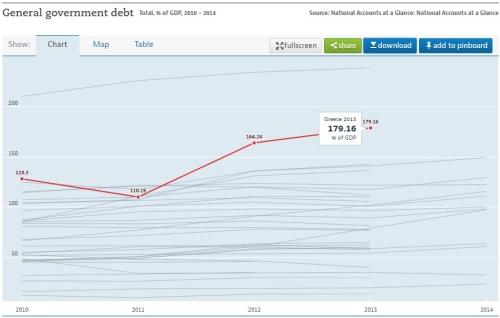 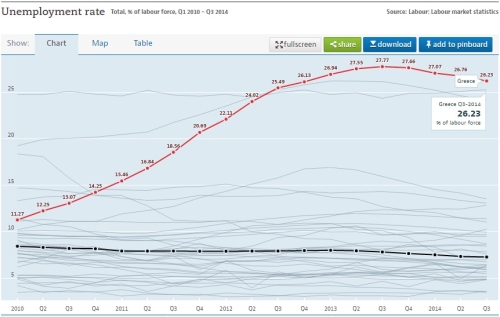 So who are the creditors of the country? European banks had the majority of the Greek debt, but now this changed and the main buyers of sovereign bonds are the IMF, the European Central Bank and an European government sponsored fund, these are known as the "troika". As of early 2015 Germany and France were the largest contributors to the fund with about 100 billion Euros. the IMF is owed 32 billions and ECB has 20 billions.

What can Greece do to save its economy is to find a new lender, which is not likely to happen, or survive with very little credit. If the vote on the referendum it's "No" then Greece will stop all the credit payments to it's debt, and by doing this it will have to match the spending to its receivings. But what if Greece decides to introduce a new currency? Reintroducing the old currency, the drachma, would be illegal with the European law, and in this case the country would be forced to exit the Union. Either way it's a lose-lose situation for Greece.

There could have been a solution to this economic problem. It should have done the only thing that every institution should do in the event of a crisis: default. Greece should have been allowed to default when all this mess has started in 2010, instead of keeping on the debt burden further on.
Translate to English Show original Toggle Dropdown