I find it useful to look at the big picture from time to time. In technical analysis terms, that usually means inspection of weekly and/or monthly charts. However, I rarely get to see analysis of "ultra-high" timeframe charts, so I decided to make a couple of attempts of my own. Previously, I analysed long term charts of the Euro, the Yen, the Cable, the Swissie, the Loonie and the Aussie.

Today I'll have a look at yearly and quarterly Kiwi (NZD/USD) charts that are covering the period from 1971 to 2015. While the yearly may be of some use for a quick overview of price action, the quarterly chart offers more detail and makes trends, ranges and patterns more clearly visible. I will be focusing on the latter for my analysis. 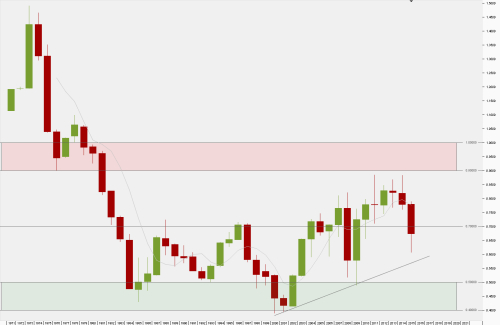 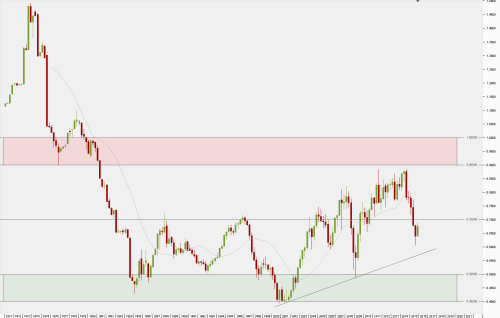 Ever since the value of the New Zealand dollar has been determined by supply and demand in the foreign exchange market, the pair has been mostly trading in the 0.40 - 0.90 range. 0.40 - 0.50 and 0.90 - 1.00 are historically proven support and resistance areas at the extremes of the range. 0.70 is the mid point of the extended range and has been acting as a prominent central pivot.

Also referred to as whole, round or psychological numbers are known to traders because they tend to work as natural support and resistance levels. The pair seems to respect the "big" big figure, the levels at every ten-cent increment (0.40, 0.50, ..., 1.50), particularly well. For the sake of clarity I've drawn only a couple of them but the rest can be seen almost just as easily.

Notwithstanding the 1984 - 1994 period, during which the pair moved mostly sideways, slope of the 5-year SMA has captured trend in the pair pretty well. The moving average turned down in the recent quarters and signals a bearish trend. With the exception of the 2008 - 2009 slump, time spent by price on either side of the moving average has so far been at least 14 quarters.

Correlation with the Australian dollar

New Zealand dollar has always been tightly correlated with the Australian dollar, particularly on higher timeframes. This is hardly surprising given countries' proximity and interdependence. Australia is New Zealand's largest bilateral trading partner while both share strong trading relations with China. Value of the former currency has on average been roughly ten cents lower than the value of the latter.

As Chinese economy is slowing down, demand for Australian and New Zealand's commodities is falling. Weak global demand coupled with supply glut in many commodity markets is exerting additional pressure on prices. Though, all this seems to be impacting Australian dollar more than its New Zealand counterpart with the antipodean cross (AUD/NZD) hitting an all time low in April.

Despite a notable bounce in Q4 2015, economic headwinds in form of aforementioned commodity weakness and incoming Fed tightening are likely to persist and at least stall the appreciation of the pair. Depending on New Zealand's ability to adjust and how RBNZ proceeds with the easing cycle, the pair may retest the long term trendline (drawn off of 2001 and 2008 lows) in the quarters ahead. Main risk to this outlook is stabilization in commodities in which case the pair will rally.
Translate to Inglese Show original Toggle Dropdown