Community
Article contest
A Long Term Technical Look at the Euro
I find it useful to look at the big picture once in a while. In technical analysis terms that usually means inspection of weekly and/or monthly charts. However, I rarely get to see analysis of "ultra-high" timeframe charts, so I though I'd attempt do it myself.

A yearly and a quarterly EUR/USD charts are displayed below. Both are covering the same period, from 1973* to 2015. I will be focusing on the quarterly chart because of its finer detail and inclusion of additional technical tools.

* You may be wondering how is this even possible because Euro didn't exist before 1999. That's true, but the preparations for a single currency union started well before that. In 1979, the ECU (European Currency Unit) was created as an artificial currency which was basically a composite index of national currencies in the European Monetary System (EMS). I suspect that the data before 1979 is calculated using the same index. 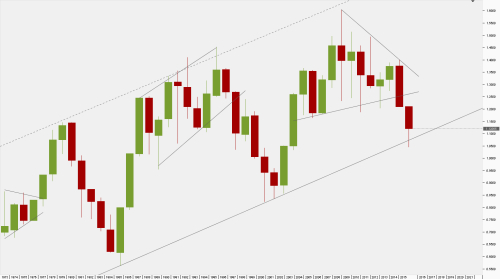 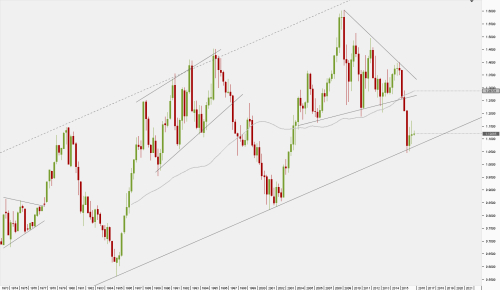 First feature that really stands out is the ascending channel. The usual practice is that a channel bottom (trendline) needs to be defined first, by a low and a higher low, before a parallel channel top (channel-line) could be drawn. In this case, price defined a potential channel top by highs in years 1979-80, 1990-91, 1992 and 1995. The channel bottom was then confirmed after the pair broke to the upside from 2000-02 consolidation. The pair then rallied all the way to the channel top, posting an all-time high of 1.6039 in 2008. Bottom of the channel appears to have been reaffirmed this year near 1.05.

I don't see the pair revisiting channel top anytime soon but it may do so at some point in the future. The channel bottom will most probably break one day, unless the dollar will be losing its value against the euro consistently overtime - which is unlikely. In the mean time I expect it to hold.

Second, less obvious, observation is that the 55 quarter SMA, which acted as a decent central line in 80's and 90's, supported the pair quite nicely in 00's and beyond before finally giving way in 2014. This average may well prove to be the top for the pair in the next decade.

Last one is the central pivot (1.25) which isn't displayed on the chart. It is the mid-point between 0.50 and 2.00 which seem logical extremes for the pair, provided that both currencies remain in balance. I expect the pair to stay below the pivot for quite some time to come.
Translate to Inglese Show original Toggle Dropdown