I find it useful to look at the big picture from time to time. In technical analysis terms, that usually means inspection of weekly and/or monthly charts. However, I rarely get to see analysis of "ultra-high" timeframe charts, so I decided to make a couple of attempts of my own. Previously, I analysed long term charts of the Euro, the Yen, the Cable, the Swissie and the Loonie.

Today I'll have a look at yearly and quarterly Aussie charts that are covering the period from 1971 to 2015. While the yearly may be of some use for a quick overview of price action, the quarterly chart offers more detail and makes trends, ranges and patterns more clearly visible. I will be focusing on the latter for my analysis. 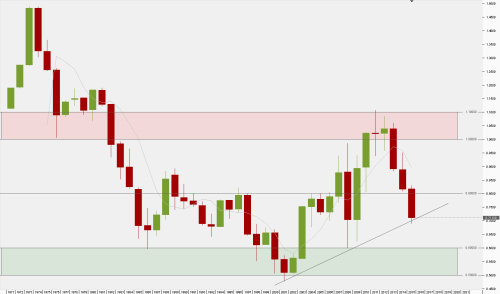 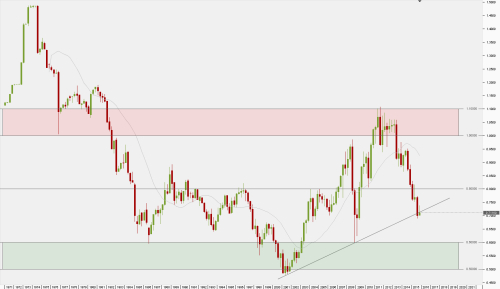 The reason for this odd behavior is simple. Australian dollar was pegged to the U.S. dollar until 1974. The peg was not fixed but rather a fluctuating one where the exchange rate was often readjusted. In 1974, Australia pegged the dollar to the trade weighted index (TWI), essentially a basket of currencies, in an effort to reduce dependence on the U.S. dollar. It was not until 1983 that the Australian dollar was finally floated.

Ever since the value of the Australian dollar has been determined by supply and demand in the foreign exchange market, the pair has been confined to (roughly) 0.50 - 1.10 range. 0.50 - 0.60 and 1.00 - 1.10 are historically proven support and resistance areas at the extremes of the range. 0.80 is the mid point of the range and has been acting as a prominent central pivot.

Also referred to as whole, round or psychological numbers are known to traders because they tend to work as natural support and resistance levels. It seems to me that this pair respects big figures particularly well. I'm talking about the levels at every ten-cent increment (0.50, 0.60, ..., 1.50). For the sake of clarity I've drawn only a couple of them but the rest can be seen almost just as easily.

Notwithstanding 1986 - 1996 period, during which the pair moved mostly sideways, slope of the 5-year SMA has captured trend in the pair pretty well. The average turned down convincingly in recent years and signals a bearish trend. Its slope has not been flattening, so that may mean that the momentum of the current trend might not have been decelerating as price action on some of the lower timeframes (monthly, weekly) might suggest.

The rise of the Australian economy and currency in 2001 - 2011 period was driven in large part by mining investment, which was in turn driven by sizable Chinese demand, while their economy was growing strongly on the back of manufacturing and exports. As Chinese economy slowed down, demand for Australian commodities fell. Weak global demand coupled with supply glut in many commodity markets is exerting additional pressure on prices.

In this post-mining-boom phase, Australian economy is adjusting away from mining but it's not doing that as fast as some officials would want it to. In order to stimulate investment and growth, RBA has cut cash rate to the record low of 2.00% and they may not have been done yet. On the flipside, Fed is expected to hike federal funds rate for the first time in nine years and to proceed with the gradual pace of tightening afterwards. That shall result in lower Australian dollar, which is expected to benefit this exports driven economy.

Current downswing in the pair is firmly supported by fundamentals. The pair is currently stalling near 0.70 but, all things being equal, it may well trade towards 0.60 in the quarters ahead. Perhaps even below that - what may prove to be a great buying opportunity. However, a risk to the outlook is that the above-mentioned fundamental factors improve and the pair trades back above the long term trendline, drawn off of 2001 and 2008 lows.
Translate to English Show original Toggle Dropdown