I find it useful to look at the big picture from time to time. In technical analysis terms, that usually means inspection of weekly and/or monthly charts. However, I rarely get to see analysis of "ultra-high" timeframe charts, so I decided to make a couple of attempts of my own. Previously, I analysed long term charts of the Euro, the Yen and the Cable.

Today I'll have a look at yearly and quarterly Swissie charts that are covering the period from 1971 to 2015. While the yearly may be of some use for a quick overview of price action, the quarterly chart offers more detail and makes trends, ranges and patterns more easily observable. I will be focusing on the latter for my analysis. 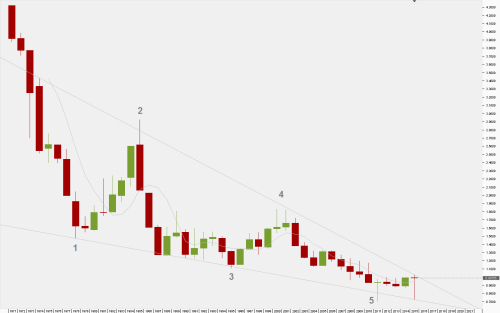 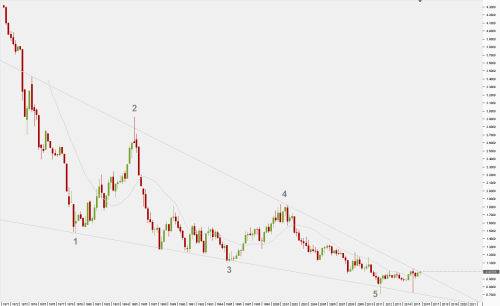 Downtrend and the Falling Wedge

During the period of the Bretton Woods System (1945 - 1971), Swiss franc was pegged to the U.S. dollar at a rate of 4.375 per dollar. After the system was abolished, franc started to appreciate or, in other words, the pair (USD/CHF) embarked on a downtrend. Even though both dollar and franc are considered safe haven currencies, stronger demand for the latter has also been a consequence of the famous Swiss banking model and massive inflows of money from all over the world. Despite increased regulation and changes in the Swiss bank secrecy regime, the country is still attracting depositors seeking privacy and protection.

In the span of more than 40 years, the pair has experienced an orderly decline during which it carved out a falling wedge. This is generally a bullish reversal pattern which is confirmed when its resistance is broken in convincing fashion. It may appear that the pair has just broken above the resistance but the resistance line is just a best fit that represents a resistance zone which may span several big figures to the either side of the line.

5-year SMA has been doing its job of capping the pair during dowswings and supporting it during upswings pretty well. It has been lagging trend direction by up to several years but its accuracy improved over time as volatility contracted. Barring a significant sell-off in the pair, the average will turn up as the Q4 2015 candle closes at the end of the year.

To recap, we have a falling wedge pattern that is likely to break to the upside in the following quarters. Elliott Wave analysis tells us that we are in the second (corrective) part of the supercycle. 5-year SMA has been lagging trend direction by a couple of quarters in more recent years and is poised to turn up. In addition, we have two bullish hammer-like patterns (2011 and 2015) on both yearly and quarterly chart.

There are also a number of fundamental factors in play that support the bullish story. SNB is determined to keep franc weak and is employing negative interest rate policy as well as so called "smoothing operations" in which it actively participates in the foreign exchange market. Fed is likely to hike sometime in the next couple of months. Even if it doesn't, its interest rates are still positive.

I think there's a decent probability that the pair will break above parity in the next couple of weeks and extend above 2015 high in the months ahead. Given the historical pattern of (roughly) doubling the value of last swing low and the fact that 2011 low was near 0.70, potential target for the correction could be set somewhere between 1.30 and 1.40.
Translate to English Show original Toggle Dropdown